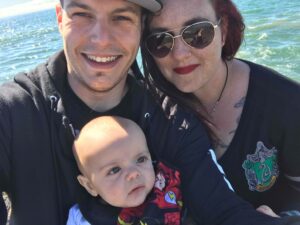 A few weeks ago my five-month-old, Lucian, started showing symptoms of teething: mild fever, fussiness, not sleeping as well, and a small decrease in milk intake. We used some teething tabs, and when the fever didn’t go down, I gave him a small dose of Tylenol. After one more dose, his fever still wasn’t going down more than one degree. He is normally a very happy baby—he sleeps so well and never has an issue eating. The fact that he wasn’t sleeping was alarming.

Then he started to have watery stools and I noticed his fontanelle was swollen. At that point I took Lucian to the ER (it was a Friday night) and told the doctors and nurses everything that had happened. By then, about fourteen hours had passed since the start of symptoms. We were admitted immediately and he was given another dose of Tylenol.

During the night, Lucian began vomiting and grew inconsolable. He had to undergo a lumbar puncture, CT, urinalysis and blood work.

A lumbar puncture—also known as a spinal tap—on a five-month-old is absolutely horrible. I had to hold him down to receive it. I struggled not to cry, and talked to him so he knew I was there. I’ve had spinals so I know that the numbing agent is painful and wished I could take it all away. He began to vomit and cry. He was so hot and tired. He’d reach for his bottle to eat but then vomit, so we had to wait to feed him more.

Once we’d gotten through the lumbar puncture, we thought we were done. However, we then had to take him to a CT machine to check if there was swelling in his brain. Again, we were wrong for assuming that was it. He also had to get his blood drawn. No baby should ever have to go through that pain and no parent should have to be so afraid.

Finally, a test came back positive for influenza B, and he was given a dose of Tamiflu. Later, as he began to feel better and keep food down, I could begin to reflect on how terrifying this experience had been.

We are pro-vaccine, but at five-months-old, my child was too young to receive the flu vaccine. Where my infant could have caught the flu is beyond me. Perhaps my school age children carried it from other kids, but I’m not sure. It was terrifying, and I am so grateful I had the wherewithal to recognize that a swollen soft spot is an alarm bell you cannot wait on.

Jaime Jacoby is a SAHM of four and I work who works with wolves and wolf education in her free time. She, her husband, and her children are one big Norse-Pagan, blended, animal-loving, pro-vaccine family.