Editor’s note: This post deals with sexual matters, including non-consensual sexual assault and may not be suited for all audiences. 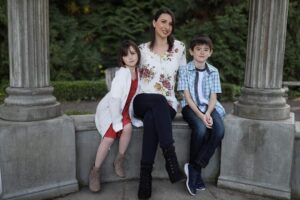 I will always advocate for the HPV vaccine because I don’t want anyone else to go through what I’ve been through. I’ve heard people say the HPV vaccine isn’t necessary, that as long as you’re monogamous you won’t get the disease. But things happen that we can’t anticipate or don’t even want to contemplate.

First, let me tell you that I’m twenty-eight, with two beautiful children: a ten-year-old son and a six-year-old daughter. When I was twenty-five, I left my daughter’s dad, with whom I had been for six years. We were a monogamous couple. Before him, I spent three years in another monogamous relationship with my son’s father. Due to existing reproductive problems, I got twice-yearly pap smears. When I started seeing someone new after the breakup of my last relationship, I insisted on condoms and started getting STD testing done along with my pap smears, even though I only ever was intimate with one person at a time.

Then, in April of 2016, after a period of time during which I had not been intimate with anyone since my last STD test, I got back into contact with a childhood friend. While visiting one night, the unthinkable happened. We had started to become intimate, but I decided I wasn’t ready and wanted to take things slow.

In July, I began to experience constant bleeding and severe pelvic pain. These symptoms were similar to a miscarriage so I went to Planned Parenthood.. I wasn’t pregnant. They decided to perform a pap smear, and sent the results off for testing.

That September, I got a phone call. My test results had come in. They had found abnormal cells. They immediately referred me to an OB/GYN in my area. The doctor scheduled a cone biopsy, which revealed that I had a mid-grade cervical dysplasia, a pre-cancerous condition.

October 2016, I had a LEEP procedure done to remove the affected cells, nearly half of my cervix. During all of this, I finally confided in my family and friends about what had happened to me. Because at the time I wasn’t sure what I had experienced was rape, I never went to get seen or contact police.

After that things were fine for my physically, until August 2017. When I began feeling this horrible pain. I went back to Planned Parenthood, but this time in the new town that I was living in. I was told  I simply had an ovarian cyst. But by September I was bleeding nonstop. While waiting for the city bus, I collapsed in excruciating pain. I called a friend who rushed me to the emergency room where they pumped me full of morphine and set me up with a referral to a new ob/gyn, saying it was just a hormone imbalance.

I opened up to my new provider about my trauma and told her about the HPV and LEEP. She decided to perform a pap smear and when the test came back, the cells had spread. She told me that I would need a hysterectomy or else the cells would continue to spread.

On November 6th, 2017, I had the rest of my cervix, uterus, and fallopian tubes removed. Since then, none of my pap smears have shown any abnormal cells.

I was not vaccinated for HPV. Although my stepdad forced me at sixteen to get the first of the series of three shots, I never went back to get the other two shots. If I had, I may have still wound up raped, but at least I could still have children.

As a twenty-eight-year-old without a uterus or fallopian tubes, I feel like less of a woman (though logically I know that’s not true). I have a severe hormone imbalance that we can’t treat due to the increased risk of ovarian and breast cancer caused by hormone replacement therapy. I can’t provide my amazing partner his dream of having a child of his own, though he is an absolutely amazing stepfather to my children.

So, when people justify skipping the HPV shots for their children by claiming that monogamy will keep them safe, I just shake my head. Nobody anticipates being raped. I was careful. I stayed on top of my testing while also using protection. But many people don’t even know they have it. Men can be carriers and show no symptoms. Your partner could have contracted HPV from a previous partner and pass it to you, even if you are monogamous. Monogamy is not a failsafe way to protect yourself from HPV.

Once my children are old enough, they both will be getting the full vaccine. Please everyone, please get this vaccination.

Keleyna lives in Washington state with her two children. She is a home care aid, caring for the mentally and physically disabled in their homes.