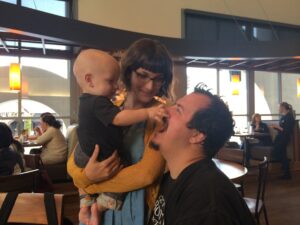 Earlier this year my 4-month-old son Mobius was part of the Disneyland measles outbreak. It’s been a stressful ordeal, but he’s been recovering beautifully. He had some complications with his eyes, but my bouncing 9-month-old is doing wonderfully! He’s crawling, cruising, climbing, and chewing on anything and everything. He loves blowing raspberries (and eating them, too), chasing after our cats, and rolling around in grass. Meanwhile, I’ve been finishing up my second nursing degree and graduate in June. 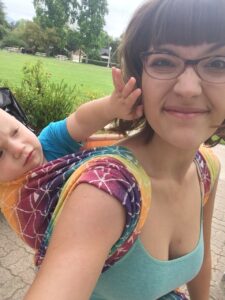 I’m still really concerned over the risk of subacute sclerosing pan encephalitis (SSPE), which is something I won’t feel entirely safe from until he’s 15-years-old. The fact that I won’t be able to shake that fear for more than a decade infuriates me.

Mobius had a brain bleed in utero, which caused a cyst, which caused an enlarged ventricle. He’s not had any complications from that thus far, but the idea of having another thing to worry about in his 99th percentile head is not comforting.

Leah Russin of Vaccinate California was able to track me down amidst all of the measles chaos, and I’m so grateful that she did. She is one of many in California working hard to improve our vaccination rates. She connected me to Dr. Richard Pan, the California state senator who authored SB 277. 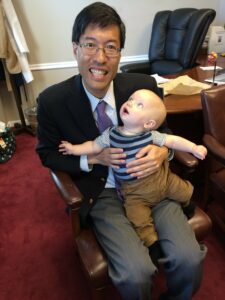 Because of the low vaccine rates in some California communities, SB 277 was proposed to eliminate personal belief exemptions – those easy-to-obtain waivers from the requirement to vaccinate your children before sending them to school.  I flew up to the Sacramento and testified on behalf of this bill in April. It has already passed through multiple committee hearings and is hopefully well on its way to passing and being signed by the California governor.

I have met so many wonderful people along this journey and am truly thankful for the tireless efforts that have been put forward in to prevent this from happening to other kids. I’m hopeful that SB 277 will pass and I won’t have to worry about sending my son to a school with subpar vaccination rates.

Ariel Loop is a registered nurse who lives with her husband and son in Southern California. She is passionate about public health, crafting, and garden gnomes.