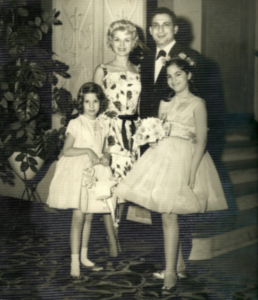 At the end of February 1960, my sister, a precocious, healthy child was halfway through the fourth grade in Rockland County when she contracted measles from one of her classmates who lived right down the street from us. His case was among the approximately 999 uncomplicated cases reported prior to the 1963 measles vaccination program in the U.S.

For every 1,000 cases of measles, one would develop into a life-long disability. My sister’s case was that one. On March 1, she was diagnosed with measles encephalitis.

I was only six years old, but the gravity of her illness wasn’t lost on me  (and today, the very mention of the word measles resonates into the deepest part of my being). My sister had been sick in bed with a high fever for a couple of days when the doctor was called to our home. As the pediatrician told my parents that she needed to be hospitalized, my happy-go-lucky, fearless mother fainted right before my eyes. I felt invisible to the swirl of confusion around me and lost inside my own home.

When the ambulance arrived, I watched quietly. One of the EMS workers tossed his unfinished cigarette into our modern suburban toilet and gave me a complicit wink. The rules I had been taught, the family unit I knew, suddenly and without warning, were flushed down the toilet like the cigarette.

The ambulance whisked my sister away to the local hospital, where doctors offered no hope. She slipped into a coma, and the prognosis was grim. “Pretend she was hit by a car” was one callous recommendation my mother received from a treating doctor. My mother thought otherwise. She stayed by my sister’s side around the clock.

I went to school and was bounced from one neighbor to another until my father came to get me. I suppose he tried to work. He had to work. The medical bills started to pile up. Plus there was the upkeep of our new suburban split-level, which stood half-empty, aching for family ruckus. Instead, it got the measles encephalitis whisper.

The modest white-shingled house with pink-painted shutters was purchased in November of 1959. With the assistance of the GI Bill, my dad, a World War II army combat vet finally afforded his $19,840 dream. Less than four months later, all was shattered, as his first-born lay comatose due to an unpreventable disease. The storybook beginning was ripped away and everything that happened in 1960 shaped our family’s path going forward.

Every single day I wonder what would our lives, and more important, my sister’s life, be today if the measles vaccination was available at that time? What if she never suffered from the measles? Would we have a close and stable relationship? Would it be like my two daughters’ loving relationship, histrionics and all? The measles robbed the landscape of our wonder years, broke in like a burglar and stole a normal sibling relationship right from under our feet.

And then a miracle happened. After five weeks of my mother’s vigil, my sister came out of the coma. Hospitals rules were not child-friendly and throughout her stay, I was not allowed to visit. So as soon as she was able, my parents arranged to get my sister to the window so we could see each other. I stood in the vast parking lot and looked up. She was smiling and waving with great ferocity. When I replay that scene in my mind, the wild-looking wave personified her fight to survive and the strength she would need to endure the battlefield of life that lay ahead.

Time moves slowly when you’re six. I don’t remember my sister’s homecoming but it was sometime around Easter because I wanted a pet rabbit. My aunt tried to appease my capricious request. “You could get a toy rabbit now, or, if you wait until your sister comes home from the hospital you could get a real one.”

“My sister is never coming home, “ I blurted out, the verity of the statement echoed loudly. Out of the mouth of babes.

At first, everything seemed normal. My mother was home. My sister went back to school. But her behavior and personality changed as a result of the encephalitis and it presented issues that had to be dealt with. She struggled with learning new concepts in subjects that she had once mastered. At home, she fought over minutiae. My parents didn’t know what to do; the teachers offered sympathy but little support. My sister became a complicated medical case in relatively uncomplicated times. The ill-equipped school system of Regents and Non-Regents classes — and nothing in between — allowed my sister to fall through the cracks.

Then my sister “fell” while she was walking home from school. That’s what I heard. In reality, she suffered a grand mal seizure. It was the first of many. Complications from measles encephalitis began to rear its ugly head and lay a path rife with stumbling blocks. After much trial and error, lifelong medications mostly controlled the seizures. But no medication could repair the damage caused by the insidious disease.

Measles encephalitis left my sister permanently brain injured. Throughout her life, she has struggled with higher-level learning skills, awkward social behavior, anxiety, denial and paranoia. My sister’s cognitive and personality changes swelled as the fickle preteen and teenage years took hold. She was the poster child for childhood bullying long before the phenomenon grew media wings. Unlike today, there were few places to turn for answers or social support. My parents knew of no other case of measles encephalitis at the time.

Trips to an eerie place called Letchworth Village was recommended for brainwave tests. Wet electroencephalogram using conductive paste became routine for my sister. She bravely accepted the EEG machine with aplomb. The purpose was for management of my sister’s condition. The hope was for successful rehabilitation. The reality was defeat. She would say that her brain felt as if a part of it was missing and asked me to check her skull for indentations. I would assure her that there were none. These were chilling, sad journeys. We were characters out of a macabre novel and my sister was the central heroine. Fifty-five years since that wild-looking wave from the hospital window, and a myriad cast of inscrutable characters, she still is.

As the measles outbreak continues to spread, it becomes a matter of public health to protect every child from this vaccine-preventable disease. The measles vaccine is a victim of its own success, as today’s parents and physicians are less likely to have had any personal experience with the cruel disease. I wish my parents had the vaccine option 55 years ago. I am certain they would have made the right choice.

Emmi S. Herman is the mother of three grown children and one perfect grandchild. A children’s book author and writer, she and her husband live in Searingtown, New York. Follow her on Twitter @GremmiEmmi.