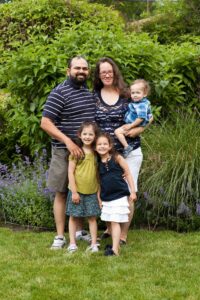 It might seem like a simple thing to most people. You bring your child to the pediatrician, he or she say it’s time to get your child’s scheduled shots. You get those vaccines and leave. To me, that is what was always done. That is just what we did.

I have three children. My daughters are Abby (5) and  Klara (4) and my son is Benjamin (19 months). Before my son was born, I never thought twice about vaccinating. I also wasn’t as passionate about vaccinating either. In my mind it was sort of an issue of, “Well, I of course am going to get my children vaccinated, and I hope you will too, but if not, oh well.”

Then, in 2011, Benjamin was born. We brought him home after two days in the hospital and had a perfect month at home. However, at exactly one month old, Benjamin started vomiting, was very lethargic, and would not eat. I brought him to the pediatrician thinking he would say that Benjamin had a stomach bug of some sort.

When we got there, Benjamin’s breathing had started to worsen. After a breathing treatment that did not help, we were sent to the ER. At the ER, since Benjamin was so young and had a temp of only 95.6, they did a whole battery of tests. My one-month-old had to have a spinal tap and catheterization to get a urine sample. He also had a chest x-ray.  The chest x-ray would later reveal that his heart was dangerously enlarged.

Our suburban hospital could not treat Benjamin there because he would most likely need a heart transplant and the only hospital that could do so was in Chicago. We had him life-flighted over there. The doctors gave us three days for Benjamin’s heart to get better on medication and with him on a ventilator before they put us on the transplant list. When the three days were up, they came and told us they were listing him as a status 1a (the most critical) as of that moment and that, hopefully, the wait would not be too long.

Three weeks later (a relatively short time to wait for an infant heart), Benjamin received his gift of life! A week after that, he finally came off of the vent that had been helping him breathe the whole time he was in the PICU. Two weeks after his transplant we were on the step-down cardiac unit, and a month after that, we were finally home!

The reason I am sharing Benjamin’s story is because on top of everything else he’s had to go through during his short life, he is also now immunosuppressed. He will be for life. This means that his immune system does not work the same as everyone else’s. So, when anti-vaccination people say, “Use some elderberries to boost the immune system,” or “That person obviously was not taking enough vitamin A, or their immune system would have responded better,” it is really hard to hear because my son has very little immune system. In fact, when he first received his transplant, he had virtually no immune system. That is why they made him wait until he was six months post-transplant to start his immunizations.

There are many people who will deny the importance of herd immunity. But I can tell you the very real benefits of it when it is intact and the terrifying feeling it gives parents like me when it is not. When my daughters both brought home notes last year that chickenpox was in their classroom, I worried. What if their vaccine didn’t work as it should and they exposed Benjamin to it? But, their vaccination worked and they did not get chickenpox, and neither did Benjamin.

People in the anti-vaccination camp would also have you believe that good hygiene and good nutrition will kill off any virus or bacteria, and that is all you need to keep your children safe, not vaccination. While I do believe that we should all be as healthy as possible, and wash our hands, especially when sick, no amount of good nutrition is going to help my son fight off measles or whooping cough. If he should be exposed to something like chickenpox, for instance, we will need to immediately call the cardiologist, who will then decide if we can stay at our local hospital or travel almost two hours downtown to where we get cardiology care (the more likely choice). There, Benjamin would have to receive IV immunoglobulin treatment for varicella. This is not a pleasant treatment. So, what is a “rite of passage” to some is a very serious disease to my child.

Because of Benjamin and his issues, I have become even more of an advocate for immunizations. No longer do I believe “Well, I’ll vaccinate my child and you do what you want.” I believe we need to all do our part to provide community immunity for those who cannot protect themselves. Not just children like my son, but children for whom the vaccinations might not take, children who do have real reactions to the vaccinations, and the elderly. If everyone who could be vaccinated was, then we could keep community immunity at a level where we would not be seeing measles once again. We would not be seeing a rise in whooping cough. We would not need to worry about children like my son and his friends in the transplant world being exposed to these diseases that could be very deadly for them. That is why I vaccinate my children and myself. And that is why I am a staunch advocate for vaccinating on time, every time.

Stacy Hillenburg is a mother to three who lives outside Chicago.  Stacy works as a developmental therapist and is a member of Voices for Vaccines’ Parent Advisory Board.