When my daughter, Cambree, who is now fourteen months old, was born, she was a healthy, beautiful 6lb, 8oz baby with a head full of hair and long eyelashes. But at her two-month checkup, her eyes were yellow and her pediatrician believed her liver was swollen. When her labs came back, they were far from normal—her ALT and AST levels (liver enzymes) were too high, as was her bilirubin. Our pediatrician told us to take Cambree to the emergency room at our local children’s hospital. We were terrified.

Cambree was admitted to Children’s Mercy in Kansas City, Missouri, and we met her new team of medical professionals—called the Liver Care team. Cambree was scheduled to have her liver biopsied. They suspected she had biliary atresia (a medical condition in which the bile ducts in the liver are blocked or too narrow), but could only confirm this by performing a procedure called a cholangiogram. 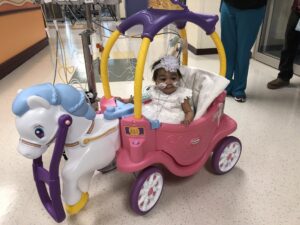 The morning of the procedure, Cambree had to have a PICC line inserted in case she needed immediate surgery following the cholangiogram. We handed her off to the surgeons at about 7:30 AM and began an agonizing wait.  About three hours later, the Liver Care team arrived in the waiting room to tell us that Cambree’s liver ducts and gallbladder were shriveled. She was diagnosed with biliary atresia.

My heart dropped. No one wants to hear that something is medically wrong with her child, especially her child now has to undergo nearly eight hours of reconstructive surgery in order to live. But we had no choice.

Cambree’s surgery is called a kasai, which involves the surgical removal of the shriveled-up parts of the liver. Doctors then hook the small intestine into the liver so the liver can still release bile. The Liver Care team did not know how long the kasai would last, but they were sure that it would not last for long. But the end result is this: Cambree needed a new liver.

Cambree did okay for a while, but then in December of 2017, she was admitted to the hospital with a severe case of cholangitis (inflammation of the liver ducts). We spent about a week in the hospital, where doctors did tests and many scans on her liver. Three months later, and two weeks before Cambree’s first birthday, she was again hospitalized with cholangitis, but now it had turned her septic. It was soon clear that Cambree needed a new liver—soon.

Instead of celebrating her first birthday with a big party, as I’d planned, we spent Cambree’s special day in the hospital. I also had to mentally prepare myself for the next who-knows-how-many weeks until we got her a new liver. She was placed on the transplant list on March 29th.

About one month later, I received a call: there was a liver for Cambree. The very next day, Cambree received her transplant. All looked rosy the day after surgery, but on her second day of recovery, Cambree got portal vein thrombosis, which required emergency surgery—eight hours of it. Then she got hepatic artery thrombosis and had to go through another emergency surgery. We were in a very precarious situation: since Cambree was battling these infections, her new liver was dying. My now-fourteen-month-old was placed as 1a (high priority) on the transplant list. We waited for word.

On May 24, 2018, Cambree received her second liver, but soon she began to suffer the same cascading medical events she had with the first liver: another hepatic artery thrombosis and emergency surgery. This second liver also began to die. Cambree was placed again as a 1a high priority status transplant list for her third liver transplant. We were told this would be the last and final time the medical team would perform transplant surgery on Cambree.

She received a liver and this time things went well. The liver shows no sign of failing. Of course, Cambree is still medically fragile, but we’re hopeful.

One thing we can’t do for Cambree right now is vaccinate her against infectious disease. Transplant babies—and any immunocompromised child—are vulnerable and entirely dependent on others vaccinating themselves and their children. A single infection can turn into a life and death battle for a child like Cambree. 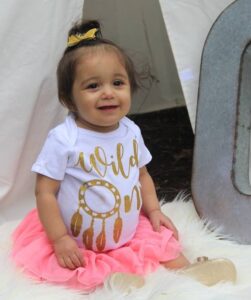 When I look at my daughter, who has fought so hard to survive, it scares me to think that there are people in my community, perhaps even in close proximity to my medically vulnerable child, who have chosen not to vaccinate because “it’s not safe.” To them, I say: you know what’s not safe? Not vaccinating your child. Putting other children in harm’s way—not to mention your own—because of misinformed views on vaccines, which are safe and effective.

Cambree is still only sixteen months old—a baby—and she has been through so much. She’s still got surgeries ahead. The thought that an unvaccinated individual could infect her with a disease that could devastate her little body is too much to bear. Please vaccinate your children. Please protect my child, who cannot be vaccinated. And please protect your own.

Cyrstie lives in a small town in Northeast Kansas. She stays at home with her 16 month old daughter, Cambree, and is going to school to be a radiology technologist.