When I was eleven years old I learned why my maternal grandmother and my mother have always been vehemently pro-vaccine. It was the day I was to get the vaccine to prevent HPV.  As we were on our way to our family doctor’s office, my grandmother asked me if I was scared. I wondered why she asked this. After all, I was up to date on all my immunizations and had been getting yearly flu shots.  I was conditioned not to be scared of shots, especially since ice cream after every appointment was a given.

But when I told my grandmother I wasn’t scared, she replied with something she had only ever repeated once, to my mother and her siblings: “You know, I lost a sister to measles when I was sixteen. She was eight. The same age as your little sister.”

I was blown away. How could I not have known? 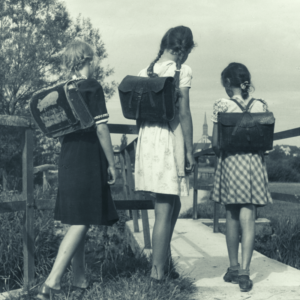 It was 1969 when her sister was diagnosed with measles. Her fever was so high that my great-grandparents would lay her down in a swimming pool, desperate to bring the fever down. When her fever reached the point of hallucinations, they took her to the hospital, but by then it was too late. Days later, she died.

It was a terrible shock. Although my grandma didn’t remember having measles, a few of her older siblings did, and had all survived. The family assumed it would be a simple rash and fever. Why worry about such things? But for the rest of their lives, my great-grandparents would regret waiting to take my great-aunt to the doctor. My grandmother never forgot. It was the first and only time I would see her cry.

I also learned that our family had also had an encounter with polio. My great-grandfather was crippled as a boy, and walked with crutches for the remainder of his life until he was elderly enough to need a wheelchair. This made an impact on my grandmother. Despite coming from little means, she got her GED, worked to provide for all of her children after a divorce left her the single mother of five, and scrimped and saved, sometimes walking to work to save bus fare, in order to pay for all of her children’s vaccinations. She knew what it meant to lose a loved one to a vaccine-preventable disease. She would not risk her children’s lives. She is truly one of the most selfless people I have ever met.

Even without a thorough education, my grandmother and her siblings trust in science. They are from a time where children did, in fact, die of what is now considered preventable diseases, because at that time they were not preventable. You don’t have to have a Ph.D. to understand the simple fact that vaccines save lives.

Carissa Snelling comes from a large family of 8 in a small town in the Midwest. She has 5 children, all fully up to date on vaccinations. Even though she is in her mid-twenties, she remembers those who were harmed by preventable diseases.