In recognition of National Infant Immunization Week (NIIW), Voices For Vaccines is participating in a blog relay to discuss the critical role vaccines play in protecting children, families, and communities against vaccine-preventable diseases. NIIW is sponsored by the Centers for Disease Control and Prevention (CDC). You can follow the NIIW conversation on social media using hashtag #NIIW.

I have two beautiful daughters. Both of their lives depend on community immunity. In other words, in order to remain healthy, they need the majority of the people in their schools and community to be vaccinated. Let me explain. 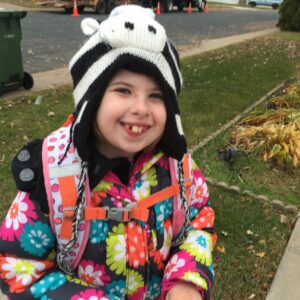 Nine years ago, I gave birth to a beautiful baby girl after a healthy, non-eventful pregnancy. Madison was an energetic two-year-old, ahead of the game, when she woke up from a nap and was unable to move one side of her little body. My husband, Noel, and I also noticed that Madison seemed unable to focus. We immediately called an ambulance, which took us to the local hospital in our suburb. Almost at once, doctors determined Madison needed to be taken to Children’s Hospital in Minneapolis—and we headed there via ambulance, full lights and sirens the whole way.

Once the doctors at Children’s had assessed Madison, we were told that our two-year-old had suffered a series of mini-strokes. Noel and I were stunned. Before we could even begin to process this news, the doctors began doing more tests to determine what could have caused these strokes. It was only after Madison’s chest x-ray that the cause became clear: her heart was enormous. It took up almost the entirety of her chest—from wall to wall. Dilated Cardiomyopathy was the diagnosis. And we were told that her heart was not even working at half capacity.

Madison was in the hospital for two weeks, and when we eventually went home, she was on blood thinner shots that had to be administered every day, as well as a number of other medications. Because Madison’s genetic tests were clear, doctors believed that this episode had been caused by a virus that had attacked her heart. It was a difficult time. Noel and I were scared—and on top of that, I was sixteen weeks pregnant with our second daughter.

In March of 2009, Sydney Jo was born, as healthy as can be. As a precaution, she underwent an echocardiogram, and it showed she had a beautiful, healthy heart. Months later, in July, Noel and I were on a date at the movies and my father and stepmother were watching the kids. Suddenly, we got a call. They thought Madison was having another stroke. An ambulance was on its way. We raced home, and Madi was brought again to Children’s, where doctors discovered that one of her med levels had gone toxic in her blood.  Her pulse was in the 30s.  They decided to install a pacemaker, and all went well with that surgery until they tried to take her off the ventilator, and she could not hold her blood pressure.

We had started a transplant workup for Madison at Mayo Clinic in case her heart function did not rebound, and that’s where doctors sent her now, to wait for a heart. She received two offers in eighteen hours. Six hours after her transplant, Madison’s new heart failed and she had to be placed on ECMO (or bedside bypass/life support). Luckily, the heart bounced back after a few hours and Madison recovered a few days later. Seven years later, she’s nine years old and as happy as can be. 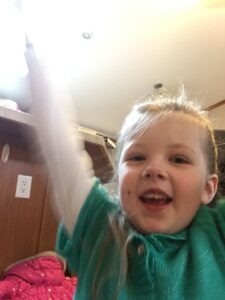 After this brutal experience, doctors made sure Sydney continued to get regular echocardiograms. Even though doctors believed there was nothing genetic involved with Madison’s heart problems, we also wanted to be sure that we weren’t blindsided by the unexpected. In October 2011, doctors determined that Sydney, too, at age two, had Dilated Cardiomyopathy. The next year, she contracted a stomach virus, which caused dehydration. Noel took her to Children’s for what he thought would be a short trip to receive fluids, but as he walked in the door with her, she started seizing due to extremely low sodium levels. When they intubated her, she went into cardiac arrest for twenty-eight minutes. After another long episode of cardiac arrest the next day, Sydney was placed on ECMO at her bedside in the ICU, and two days later was transferred to Mayo Clinic via helicopter, still on ECMO, to be listed for transplant.  She got her new heart in two days.  Sydney is now six and she, too. is doing quite well.

Back to vaccines. Because my daughters are transplant recipients, their immune systems do not work at the same level as everyone else’s. They cannot receive live virus vaccines, and so they are extremely vulnerable to contracting vaccine-preventable diseases, which would devastate their bodies, and put their lives at risk. But you wouldn’t know that my girls are at greater risk than the average child just by looking at them. In every part of our community, there are individuals facing their own health issues who depend on the community around them to vaccinate because they cannot. It can be a matter of life and death.

Linsey Rippey, her daughters, and her husband live in Minnesota where they all actively advocate for on-time immunization and for organ donation awareness.

Editor’s note: Be sure to stop by the other #NIIW relay participants’ blogs to learn about the benefits of immunization– tomorrow’s post will be hosted by Every Child By Two – Shot of Prevention.