It all began on a warm afternoon in May of 1996. My 6-year-old daughter was swinging on her swing set when she suddenly stopped and, raising a hand to her neck, asked, “Momma, what is this?” I pulled her strawberry blond hair back to reveal a large blister-like bump below her ear lobe.

“Does it itch?” I asked. She nodded her head yes. I tried to assure her, and myself, that it was probably just a mosquito bite. But soon, more blisters began appearing on her body, and I knew this was not just a mosquito bite. I suspected my daughter had chickenpox. Our pediatrician gave me instructions for home care and what to expect. I had been planning to make an appointment for my daughter to get the chickenpox vaccine as soon as she was out of school for summer break, but now it was too late.

I then called my daughter’s elementary school to let them know she might have chickenpox and was informed that another girl from her class had been out sick with chickenpox as well.

For a couple days the illness progressed as expected. My daughter did seem to have an unusually large number of pox blisters, but my mom reminded me that I had had a pretty bad case as a child as well. So I tried not to worry. All that changed when, one afternoon, my daughter became so lethargic that I could not get her to stay awake long enough to eat or drink anything. Her fever spiked, and she developed a nasty sounding cough.

I called the pediatrician. I was asked to bring my daughter into the office. After examining her and listening to her lungs, the doctor sent us to a nearby hospital for chest x-rays which revealed that my daughter had developed secondary pneumonia due to her chickenpox infection. My daughter was immediately transported to UNC Chapel Hill Hospital and admitted. The doctors there told me if I had waited just one or two more days to seek medical care, my daughter may have died! In fact, her case was so severe they took pictures of her for medical education. 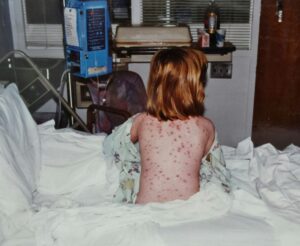 After staying in the hospital for a week, my daughter was released in time to attend her 1st grade end-of-year awards program. But this illness left her with scars. There were physical scars, because not only was her entire body covered from head to toe with the pox blisters, which left faint scars here and there, but her lungs also had pox blisters which have left scars on the lining of her lungs. These scars have made her more susceptible to subsequent lower respiratory infections, such as bronchitis and pneumonia, both of which she had in childhood. When she has a cold, it often goes into her chest, making it hard for her to breathe and causing chest pain and discomfort, as well as a chronic cough that lasts for weeks.

I have always struggled with guilt because if I had only gotten her vaccinated for chickenpox before she had contracted it my precious daughter would not have suffered when she was a child and continue to struggle as an adult.

My daughter is now in her late twenties, married, and expecting her first child…a daughter of her own! I know they plan to vaccinate their children, not only because of her experience with chickenpox and its resulting scars, but also because, like me, they believe in vaccines, as well as the work and research of the medical community.

The author is a stay-at-home wife, a mother and soon-to-be grandmother, who lives in central North Carolina with her husband and two mini-dachshunds.  When not spending time with my family, she can be found with a camera in hand doing a little nature photography and backyard bird watching.  She also enjoys writing and using nature photos to create inspirational scripture art.