This is a story like ones that thousands upon thousands of mothers with autistic children could tell about what happened when their child had the MMR vaccine. It is one that, mostly, goes untold – even in the middle of a measles outbreak when parents are being strongly urged to vaccinate their children.

A sunny Wednesday afternoon in the Spring of 2009: a mother sits in a doctor’s office, a chubby-cheeked one year old on her lap. The family doctor looks at his notes and asks Mam to confirm the birth date of the wriggling baby boy. Mam replies. “Happy Birthday little man!” the doctor beams. “Now, if you’ll just roll up his sleeve, we can let him get back to his birthday cake.” Mam complies and the MMR vaccine is injected. To the surprise of mother and doctor, the child laughs. 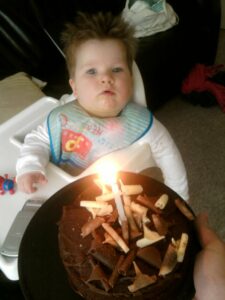 Evening: birthday cake is brought to the birthday boy. He recoils, crying.

Ten days later: the tot wakes in the night, sobbing. His temperature is a little high so Mam administers paracetamol (acetaminophen) and cwtches (Welsh cuddles – our greatest export).

Age two years and four months: the boy, centre of his Mammy and Daddy’s world, is diagnosed as severely autistic.

My son has autism. It is part of who he is. He never looked at or ate his birthday cake but then that’s more or less what Dad and I had expected when we got it. He was hot and grumpy some days after the jab but the next morning was fine. That’s what happens when the body mounts its immune response to the vaccine. He was giggly, happy and autistic before he got the MMR shot and, five years on, he still is.

I won’t go into the details of the 1998 Wakefield paper or how it was subsequently discredited and its odious author proved a fraudster – Brian Deer has done a far better job of that than I could ever do. Before the Wakefield paper, many people’s idea of autism came from the film Rain Man. Released in 1988 it starred Dustin Hoffman in the role of autistic Raymond, brother of the flashy and trashy Charlie, played by Tom Cruise. The very idea of the ‘idiot savant’ intrigued film goers and is greatly responsible for promulgating the fallacy that genius skill or talent and low IQ are characteristics of autism. Television did little around this time to educate the public otherwise. Depictions were also limited to savants such as artist, Stephen Wiltshire as in the 1987 BBC documentary series within a series, The Foolish Wise Ones (part of the much missed Q.E.D. programme) that focussed autistic savants.

Now, though, autistic children are labelled as poisoned, full of toxins that have to be removed. The very existence of autistic adults is denied. Parents describe their children, the once perfect repositories of their hopes and dreams, as “soul-less” and like “zombies.” Empty children, dead behind the eyes, a financial and emotional impediment to the rest of their family’s happiness and well-being. As the parent activists’ voices grew louder, a few individuals used to public attention seized the chance to escape impending obscurity and become spokespeople for parents of autistic children. It was then the children themselves began to disappear and their mothers (usually) took centre stage.

Possibly the most famous anti-vaccine activist in the US  is Jenny McCarthy. She has a son possibly misdiagnosed with autism. She holds a degree in autism, its causes and treatments from “The University of Google.” In the UK, we have Polly Tommey, another actress whose biggest parts seem to have been as a body double. She is unapologetic in her support for swindler Andrew Wakefield and has recently moved to Texas to be at her hero’s side peddling their reality TV wares. She, too, has a son with autism. Aside from their out and out rejection of well conducted science, both women insist that vaccines can and do cause autism. The latest measles outbreak in South Wales attests just how damaging an idea this is for public health. Young children, more than most, are likely to suffer complications of this infection which include pneumonia, SSPE and death.

Another notion both these women seem to accept as true is that autism can be cured by “treatments” offered by groups with which they are closely associated. These range from the benign but useless, for example bathing in epsom salts to the equally ludicrous but potentially deadly chelation. In between these two extremes you’ll find restrictive diets, enzymes supplements, mega doses of vitamins,  chemical castration and bleach enemas. Frighteningly and frustratingly, it is these two purveyors of unproven and even fraudulent science who appear on TV, are interviewed on radio and profiled in papers and magazines every time a story about autism makes the news. Tommey has even had the ear of the UK’s former Prime Minister, Gordon Brown. They claim to speak for the parents of autistic children even though parents who disagree with their causation theories of autism are berated.  As Dr Paul Offit puts it,

“A special kind of venom [is reserved for] parents of autistic children who do not believe vaccines are at fault.”

So, with long queues outside vaccination clinics in South Wales, could it be that parents are beginning to see the light and the error of their folly?  The WHO (World Health Organization) had  hoped  measles could be eradicated in Europe by 2015. The realisation of that hope would be an achievement indeed. While this will be of enormous benefit to public health, autistic children whose parents subscribe to Tommey and McCarthy’s way of thinking will still suffer not because of measles, mumps or rubella but from the effects of the ‘treatments’ and ‘therapies’ based on the flawed science of the vaccine-autism debate. They talk of battling autism. They are  battling their own children.

Whether an autistic child is deprived of the food they love on a gluten and casein free diet, or have their health and their lives put at risk being chelated, their suffering will continue long after the vaccine debate is finally over.

Martine O’Callaghan lives in Wales with her husband and their Pwd.  In addition to being a freelance writer, Martine is also an outspoken advocate for the rights of disabled children and a champion for the acceptance of neurodiversity.  This post was originally published at her blog, Autismum.