I need your help. 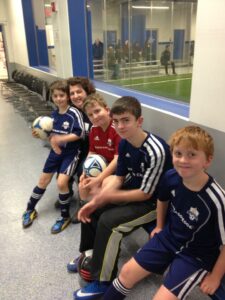 “Herd immunity” or, as I much prefer, “community immunity” is not just a vague idea for my family:  it is literally what keeps my kids from getting sick.

Let me explain. We have four sons. Their names are Harrison (13), Holden (9), Langford (9)—yes, they are twins!—and Davis (8).  Harrison, Holden, and Davis have a genetic, inherited immunodeficiency called x-linked agammaglobulinemia, or XLA for short. XLA is in the family of “primary immunodeficiencies” (PIDs), which can vary in severity, but which all share in common the fact that people with these conditions do not have fully working immune systems.

Primary immune disease is congenital (people are born with it). Some PID is genetic and some is not. Primary immune disease also varies in severity and availability of treatment. Adults and kids can have PIDs.  We happen to have a condition that affects only males, but other forms of PID can affect either gender. In short, my kids are missing half their immune system.

This means they do not produce immunoglobulins and are unable to fight off certain infections. Harrison was diagnosed with XLA when he was almost two because he had caught several strange infections. Once he was diagnosed, we learned that I am a carrier, and my husband and I actually tried to have kids without this condition: we went through in-vitro fertilization with pre-implantation diagnosis to conceive our twins, were implanted with what everyone thought were female embryos, and ended up with our amazing BOYS.  Holden was diagnosed with XLA in utero.  When I got pregnant with Davis the old fashioned way, I was surprised and scared and thought I could not handle another child with XLA:  he was diagnosed at birth, and we ended up with a family we never expected or imagined, but who we were clearly meant to have.

We do everything in our power to keep them healthy.  My boys get monthly infusions of a medicine called intravenous immunoglobulin, or IVIG for short, which provides them with some of the immunoglobulins that they are lacking. They are also all on a low dose of a daily antibiotic, just prophylactically. Until a cure is found, my sons will need this medicine, maybe even for the rest of their lives. And it’s a production. We do an “infusion day” for all three boys.  Medicine is delivered to our house, and our home health nurse comes here to start their IV’s and stay for the infusion.  The IV infusion lasts about two to three hours, and the boys have small pumps that are put in bags, and they can be as mobile as they want while they infuse.

Still, despite this medicine, my sons are still vulnerable to disease. Harrison, Holden, and Davis’ bodies don’t have the amazing immune system memory function that the rest of us take for granted:  their bodies don’t make cells that fight off disease.  We rebuild their immune systems as best we can every single month.   Langford gets all of his vaccinations, but his brothers simply cannot, since their bodies would not mount the immune response to the small dose of the vaccine.  So, even with their medications, they are more at risk than he is of catching an unexpected viral or bacterial infection, and of that infection becoming very serious very fast.

Before we had our boys, we went through years of fertility treatments, and suffered a miscarriage and full term stillbirth.  We’ve been though a lot, but we now have a strong, silly, loving family, and much as I’d like to think I could do everything for my boys, I can’t. I rely on the people in my community to vaccinate themselves and their children. We are all part of the same community – we band together to protect one other against outside threats all the time. This is one of those times when we must come together.

Most of you have never met my kids, but you might know other kids – and adults – with primary immune disease. They are your neighbors, your friends, and your coworkers. Many patients of PID don’t visibly look sick, so you might not even know that they have this underlying condition, but they are in every community and they need protection. If you do not vaccinate, you are putting them at risk.

My boys don’t fear much – these are kids who get IVs monthly – but a couple of weeks ago we had a scare. Holden developed a bad rash and had to be admitted to the hospital. It turned out to be a pseudomonas infection in his skin, which had snuck up on his immune system, and he needed IV medicines and lots of tests.  His brothers missed him acutely.  Every morning, their first question was how he is doing and whether they could talk to him.  They brought him the stuffed animals he missed most, and they played on his hospital bed with him, making it alternately a roller coaster, a boat and a train.  For our family, this was a reminder of how much we need each other, and how scary and real it is when one of the boys is sick. 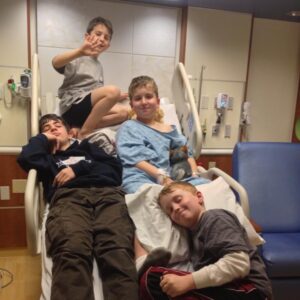 When I think of people who choose not to vaccinate their children, I also imagine how many of them are likely very kind people: the type of people who would pull over and help us if we were stranded. Who’d catch my kid if he were falling from a tree. Who’d probably even buckle my kid first if they were driving a bunch of kids in a car and didn’t have seat belts for everyone. I get it! I’m a mom, and I’d do the same for their kids, any day.

Perhaps no one has put it to these non-vaccinating parents this way, but vaccinating your kids is just as – if not more! – immediately helpful to my kids, and other vulnerable kids in your school or community, as any of these things! If you are a parent who is vaccine-hesitant or who has chosen not to vaccinate, my plea to you is this: My kids are my heart and soul, just as yours are to you, and I need your help to keep them healthy and safe. I would do the same for you.

More information about immunodeficiencies can be found on the website of the Immune Deficiency Foundation (“IDF” – online at www.primaryimmune.org“).

If you enjoyed this blog post, please join Voices for Vaccines today.