As my child turns two this year, I’m looking back at some of the earlier memories I have of motherhood. During pregnancy, I recall one of my good friends asking me in secret, “Are you planning on vaccinating your child?”

“Yes, of course,” I replied. She said she did as well, and I remember thinking “What an odd question to ask.”

At six months pregnant, I was sent to help out a coworker at a different site. The site happened to be a preschool. The teacher stopped me at the door and said, “One of the kids here has measles. We’re trying to send him home.” The child had had a rash all over from head to toe, reddish eyes and had a temperature.

I was livid. Not for me—although had I been exposed, both my unborn child and I would have been at serious risk—but for the other children in the classroom. Since I have been fortunate enough to grow up never experiencing measles or even seeing measles in another person, I was angry for the children who had been exposed. “Measles?” I remember thinking. “That happens here? I thought that was gone.” 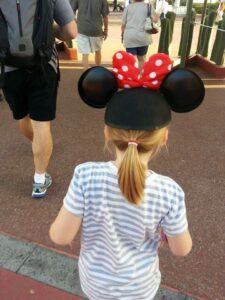 Fast forward to my third trimester, a co-worker had asked me what types of classes my husband and I were taking to feel more prepared for the birth of our child. She had given me some recommendations, which I, of course, as a nervous soon-to-be first-time mom, researched right away when I got home. My husband and I were already taking classes through our hospital, but I truly love to learn and try new things, so we decided to try some type of birthing class. Looking back, I did find the class helpful in some ways such as different methods to try to get through those gnarly contractions, ways a partner could be supportive during labor, etc—but there were other things that ended up being discussed that my husband and I felt were not part of what we were looking for. Things like: identifying “holistic” doctors in the area, boycotting the use of epidurals, the necessary inclusion of a doula, and so on.

Still, I found myself networking with some of the other pregnant ladies in the class, and continued to do so shortly after everyone gave birth, via email threads, group chat, group texts, etc. It was nice to feel like part of a community where I could share the joys and challenges of being a new mom with others in the same position. However, discussions changed as our babies got older. Conversation changed from “we like this type of pacifier” to “you need to get this book by Dr. Sears!” followed by various reasons why vaccines are “dangerous.” It was never a secret to me that some of these ladies were anti-vaccine or “vaccine-hesitant.”  At the time, I just saw it as a difference in opinion and never engaged in those discussions.

But as my daughter got closer to “vaccination time,” the discussions between us moms became more and more about rejecting vaccines altogether, spacing out vaccines, or opting out of some vaccines. I remember wondering how a parent would know which vaccines to “opt out of.” What sources were these women using to make this important decision?

I soon found myself to be the “odd-man out” in this community of mothers. I wanted to take some time away from them to decide where I stood on this issue and to see if I continued to feel supported, to see if I gained any real benefits to being included in the ongoing conversation. This meant detaching myself from all group forums temporarily. Prior to doing so, I had confided in one mom I thought was particularly understanding. A few days later, however, I found I had put my trust in the wrong person. She “outed” me in a forum for not sharing the group’s views on vaccines. Another mom privately wished my infant daughter ill will because I’d chosen to vaccinate.

This experience soured me on the motherhood community. I began pushing away other moms who tried to befriend me. I felt it safer to stick to other family members who were already moms themselves. It was only a few weeks after this incident that the Disneyland measles outbreak happened. As I watched the numbers grow and spread across California (and then across other states), I felt like I had dodged a bullet and was thankful to no longer be in contact with the group of mothers who were rejecting vaccines.

Looking back on this experience now, I see there were some things I could have handled differently–including taking myself out of the group earlier! I see now that fear was guiding the group’s decision making about vaccines. I also realize now that the internet is not exactly helpful for new parents, as there is simply too much information out there, not all of it based in science.

But even after experiencing the petty attacks from other mothers for simply choosing to protect my child with immunization, I do not think these women are bad people, nor do I wish them ill. In fact, I focus on the fact that we have something in common: we all want to feel like we’re protecting our children, that we’re doing what is best for our families. But there’s an important difference between us: I am not only interested in protecting my child, but also in protecting other people in my community. I would feel terrible if my child unknowingly passed on a disease to a newborn, a child battling cancer, or a beloved elder in the community. It is not just about my child, but about protecting others’ children and others in our community.

The scientific research is clear and overwhelming: Unless the child is too young to be vaccinated or there is a legitimate medical concern that would make vaccination inadvisable, there really is not a good enough reason not to immunize your children. Of all the struggles that come with just being a parent, this may, at least, be one less thing to worry about.

Beverly Smith* lives in California with her husband and her daughter. She works in Special Education.

Editor’s Note: The author is using a pseudonym to protect her identity.