With my first child, I chose to delay and selectively vaccinate. I considered myself reasonably well-informed, and saw this as a way to mitigate perceived risks. However, when my daughter turned one, still behind on her jabs, I wavered on vaccinating her at all and eventually decided not to continue her immunizations, even on the delayed and selective schedule I’d created.

Over a year later, I was pregnant again and we had to again consider vaccines. My husband and I were conflicted on how—or even whether we’d vaccinate again. I decided to dive in and intensively scrutinize everything I could about vaccines.

The first thing that made me question my former stance against vaccination was learning that there are lots of studies on the Tdap vaccine administered during pregnancy. Before doing my own research, someone had shown me a vaccine insert that she maintained “proved” that Tdap hadn’t been studied in pregnant women. And yet, here were the studies, right in front of my eyes. Why did the insert appear to say otherwise? This question led me to investigate what vaccine inserts actually convey, which was not that vaccines hadn’t been studied or had scary side effects..

This was just the tip of the iceberg. Little by little, I found that every single verifiable anti-vaccine claim I had ever bought into was a misunderstanding, or a distortion, or even just a flat-out lie. I learned about the intense work that goes into creating the vaccine schedule. I learned how vaccines are monitored for safety across the globe. I read up on the safety monitoring that happens in various countries. I also came to realize that all these nations, with their different healthcare systems and different governments—nations that can seldom agree on anything and some that are outright hostile to each other—nevertheless have come to a consensus on vaccination.

As I was discovering all of this, a friend of mine fell ill from flu—so ill that she had to be hospitalized. She had not gotten a flu shot. Since I was pregnant, I didn’t go to the hospital, but my brother kept me updated on my friend’s condition. In less than three weeks my friend went from flu, to pneumonia, to sepsis, then to coma. She died. She was twenty-eight.

At the time of this tragedy, I had been afraid to get vaccines while pregnant, but that was fear was nothing compared to seeing a vivacious young woman taken down by a vaccine-preventable disease. My grief was certainly nothing compared to that of her child. I got my flu shot at the pharmacy two days after my friend died, and Tdap at my prenatal appointment the following week.

I thought about how my own daughter had contracted influenza when she was two. She suffered with a 106-degree fever. I later learned that about 80% of the pediatric flu deaths in one flu season were in unvaccinated children. It finally hit me how greatly I had endangered my daughter when I opted-out of the flu vaccine. 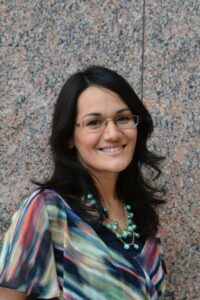 All of this convinced me to get my daughter caught up on her vaccines. She is getting them alongside her infant brother, who is being vaccinated on schedule.

My daughter is almost four now. My son is five months old. Both are thriving, and I have peace knowing that vaccinating them is one of the best and safest things I can do for them.

Anita was born and raised in New York City, a child of immigrant parents. She delights in raising her own family in this diverse and culturally-rich city, and is an active member of her church.