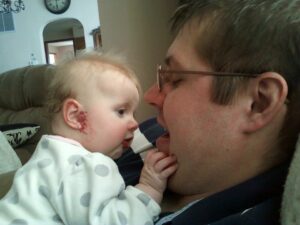 I was a scientist long before I became a mother. My interest began when I was a young girl roaming the forests with my father, and was fueled by high school biology classes. I went on to study biology and chemistry in college. By the time I gave birth to my first child, I knew about the immune system, vaccine theory, and herd immunity. I had no hesitations about vaccinating my child according to CDC recommendations.

It was when my second child was born that these scientific principles became real to me.

My sweet Caroline was born with an infantile hemangioma on her face. Hemangiomas (sometimes called strawberry birthmarks) are common, generally harmless vascular tumors. These growths go through a proliferation phase, becoming larger before they involute and often disappear on their own.

Caroline’s hemangioma presented in a “beard” pattern and was particularly worrisome because it involved her lip and gum tissue. If left untreated, it could have compromised her ability to eat or speak. There was also concern about airway involvement, which would threaten her ability to breathe. When she was only two months old, she started taking oral corticosteroids to suppress the growth of her hemangioma.

Caroline was put on the highest dose possible for her age and weight. The plan was to start with an aggressive treatment and then taper over the course of six weeks. In the meantime, Caroline underwent an MRI/MRA, EKG, laryngoscopy, and soft-tissue x-rays to rule out internal hemangiomas and PHACE syndrome. Thankfully, all of those test results were normal.

However, as we tapered the steroid dose, her hemangioma fought back. The hemangioma continued to grow, becoming bright red and swollen and stretching the delicate skin on her lip. The doctors, along with my husband and I, eventually decided that Caroline would be put on a higher dose of steroids, and a topical treatment was added. She would continue the regimen for nearly eleven months.

So what does this have to do with vaccines? Because corticosteroids interfere with the body’s immune response, my daughter was considered immunocompromised for an entire year. Suddenly, vaccine theory and herd immunity were not just textbook terms to me. They were necessary for my daughter’s health. Fortunately, our family and friends were not only compliant, but overwhelmingly supportive. They washed their hands, removed their shoes, and, most important, received their flu vaccines. Because of the precautions taken by those close to her, Caroline made it through that year without any illness – not even a single sniffle.

Through this experience, I realized that the anti-vax movement is a real threat to my child and the many others who are immunocompromised. Well-intentioned parents are making decisions about their child’s health care based on the misinformation and outright lies perpetuated by the anti-vax community. Parents who vaccinate, like you and me, have the power to tell those parents the truth and to back it up with scientific data. We have the power to protect children like my Caroline, immunocompromised adults, and the elderly

The anti-vax community likes to poke fun at the “herd.” But I am proud to be a part of the herd. The herd takes care of its members. We belong to one another. Maintaining a vaccinated population is a simple, effective, and important way to take care of one another.

Pamela Reddy is a stay-at-home mother of two from western Kentucky.  She holds a bachelors degree in biology.