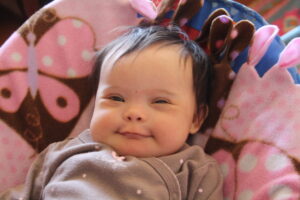 Jude looked up at me with an expression of incredulous shock. She was being hurt and I was standing there doing nothing about it!

At two months old, she couldn’t know how thrilled I was that she was receiving her first round of vaccines. Of course, I wasn’t happy to see her little face scrunch up in pain or to hear her angry wail at the indignation of being hurt. But I was so happy in the knowledge that her body was building up a wall that would protect her from deadly diseases.

I know, I know, it sounds a bit melodramatic for a first round of vaccines. But when your child has just come off a two-day hospital stay for RSV (Respiratory syncytial virus), and has Down syndrome, you start to feel a little differently about things like vaccines and medical science.

Like a lot of women I got caught up in the “must do it better” game of motherhood. For me, this translated into being the best attachment-parenting (AP) mom ever. Attachment Parenting mothers breastfeed, baby wear, and do anything they can to form a close attachment with their babies. I felt like I had messed that up with my first three children. My son had recently been diagnosed with epilepsy, and my daughter was displaying signs of Asperger’s Syndrome.

In the AP community, many parents question vaccines, something I hadn’t done with my first two children. Now I found myself wondering if perhaps I had caused my children’s problem by vaccinating them. People I knew were incredulous that I had trusted the medical community enough to give routine immunizations without questioning it all.

So I read their links, but I didn’t dig too deep and began to worry. I delayed the MMR with my third child, and with my fourth we didn’t do it at all. It wasn’t until my third child started having panic attacks that I wondered if maybe vaccines weren’t the issue. Around this time we discovered I was pregnant with our fifth child.

When I found out at sixteen weeks pregnant that Jude had Down syndrome, I was already in the midst of rethinking my anti-vaccination position. Through a good friend, I had been reading some better science. I also read The Panic Virus by Seth Mnookin and the works of Paul Offit. Clearly the link between autism and the MMR vaccine was false, perpetuated by the extremely unethical Andrew Wakefield (in my opinion he doesn’t deserve the honorific title of “doctor,” and evidently the British Medical Society agrees). My concern about Big Pharma making a small fortune on vaccines was also debunked.

In fact, I was starting to think the people making all this money in this vaccine debate weren’t the vaccine manufacturers at all. Instead, it was the people preying on the fears of parents whose dread of autism hung over them like a phantom.

Preparing for Jude was not like preparing for my other four children. I was thrilled I’d still be able to birth with my certified nurse-midwives, but I no longer mourned not being able to have a birth center birth, as I had with my fourth child. Knowing there was an NICU made me feel secure that if something, went wrong we’d have help.

I didn’t shun ultrasounds as I had with my last pregnancy, and instead gave thanks that there was a technology that could monitor my baby’s heart before she was even born. In fact, medical technology gave me hope for my child’s future as it is has increased her life expectancy from twenty-five to sixty years.

And in terms of immunity—protecting Jude’s health, and the rest of my family’s—I prepared by creating a wall of protection for Jude by vaccinating the whole family. People with Down syndrome often have a compromised immune system, which means that they are more susceptible to things like rotavirus, the flu, and other vaccine-preventable diseases. Because their systems don’t always work in typical ways, they also more likely to experience complications due to the illnesses vaccines prevent. Every major health organization strongly recommends vaccinating babies with Down syndrome on schedule. I trusted these sources, as they were the same sources that had the means to give my daughter a long and healthy life.

Even before she was born, vaccines were working to protect Jude. We had the flu shots. I had the Tdap. My fourth child was brought up to date on her vaccines. We were determined to build a wall around Jude for her first few fragile weeks. And if we could have gotten her the Synagis shot, the injection with antibodies that help protect high-risk infants from RSV, we would have in a second.

Jude has changed my world in a multitude of ways, all of them positive. Because she is this amazing gift to us, our life is committed to ensuring she is healthy and well cared for. This means being informed on all decisions concerning her health care. I’m learning to read medical journals and science articles. I am learning how to ask smart questions. This means that I am a more informed parent—an informed parent who proudly vaccinates her children. I still attachment parent, but I now realize that attachment parenting is also about giving your kids the medical services to keep them safe.

With each shot Jude gets, I feel a sense of relief that in this simple act I am able to protect her in a big way.