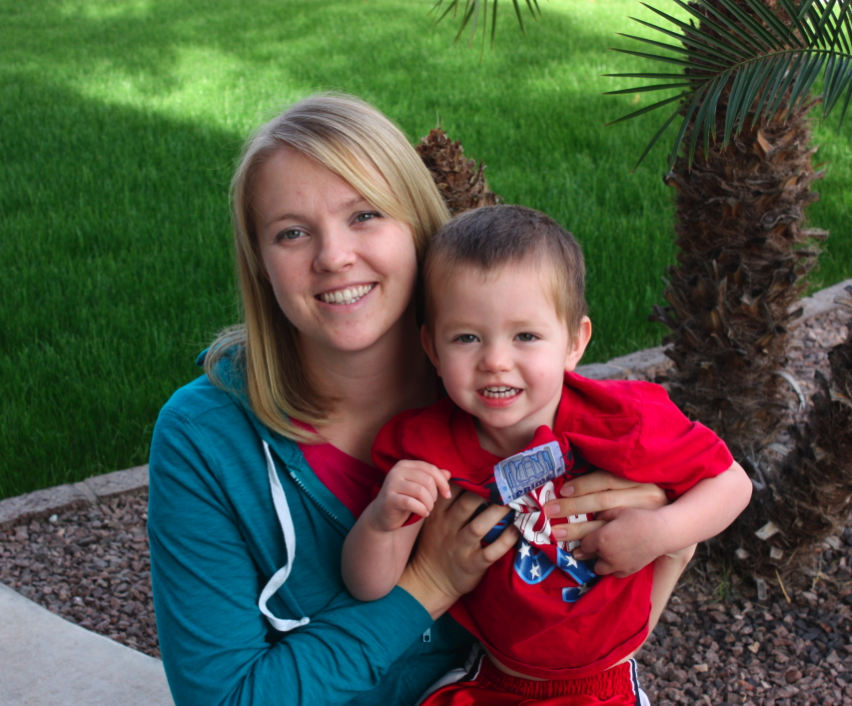 I can still see myself now standing in front of the closet with a baby in my arms. There was a blue dress with yellow flowers, perfect for my little girl hanging there. There were three crisp white shirts for my sons and three matching argyle vests, blue triangles, green triangles, perfect for Easter.

Even though I knew it would only make me feel worse, I couldn’t help myself. I gave the smallest shirt a tug to release it from the hanger. My hands worked quickly as I looped the tiny buttons through the holes and struggled to hold my squirming baby still enough. Quickly, I pushed the vest over his head and threaded his arms through the little armholes. It looked darling. Just like I knew it would.

Unfortunately, aside from the picture I snapped for Grandma, I knew no one would ever see my son in that Easter outfit. I simply could not risk bringing him to church—even for Easter.

You see, my five-month-old was recovering from a viral infection that attacked his central nervous system at three months old. He was doing better—working hard to regain the motor milestones and coordination that the virus stole from him. But there was a problem, a big one. Because my son had experienced an episode of swelling in his brain, his doctor needed more information to determine if he was a good candidate for vaccines, and he had come away from his four-month checkup without receiving any vaccinations.

In other words, in a better world, herd immunity would have offered my son all the protection he needed. But in my world, this was not possible. There had been a death attributed to whooping cough in my area, and I was forced to stay home. I could not risk it. My son was unlikely to fight off another terrible infection.

Because I found myself isolated inside, I was spending more time online. Here, I found out a frustrating fact. There were a few friends of mine who frequently posted their favorite anti-vax articles to Facebook. Before my son’s illness, I had simply dismissed their views as weird or misguided. After my son’s illness, and especially after the Easter I spent at home worrying, the misinformation they passed off as “fact” left me awake at night fuming. How could they possibly be so callous? They knew what our family had been through. It had been very public! Weren’t they worried about my baby more than supposed “toxins” present in vaccines? Didn’t they know how afraid I was that their children or children like them would infect my son?

Then, a different kind of article showed up in my newsfeed. It was about a couple in New Zealand whose son hadn’t been vaccinated and, consequently, he had contracted tetanus. Instead of treating the illness and quietly vaccinating, the couple had gone public with the story, risking the ridicule and criticism they would receive because they wanted to protect other children from suffering. As a mother who had also watched by the bedside as her child’s body had been ravaged by illness, I was deeply moved. It was a big moment for me, and I decided to hit the share button.

Almost immediately, one of my more vocal friends posted a long comment explaining what the couple had done wrong and reaffirming her anti-vax position. I could also see in my feed that she had turned to her anti-vax friends for help in what to say to me. The next day she posted that she had written a guest post on a blog somewhere in response to the article I had posted.

Actually, this response news strengthened my resolve. One way I had justified my silence was by saying I was “just a mom.” Although I had a college education, I was not a scientist or a doctor. Surely, I had thought, there was someone more qualified to say something. But I also knew this woman; she wasn’t a scientist or a doctor either, and now she was giving out medical advice! I challenged her on her own post and then made a point to do it again. I challenged a few other articles posted by others and posted articles or blog posts supporting vaccination to my own feed. Sometimes it got a little hairy, but it was actually better than the fretting helpless feeling silence had caused me.

Even though I still fear offending those I genuinely care about—they are my friends, after all—I have learned there are always others reading my comments. I usually get a lot of “likes” from people I don’t know, people who may have been waiting for someone “more qualified” to take on the issue.

But I know there are others reading who are confused by the scary claims made by adamant anti-vaxxers, and I’ve learned those people are the most important—even though they rarely leave comments or “like” things. I want the silent readers to know the truth—or at least to know that Facebook is not where to find it. When I feel the conversation isn’t productive anymore, I always leave the offer that anyone reading can add me as a friend and ask me about my story. And here’s the cool thing: people have!

To my knowledge, I have never swayed any of my passionate friends to give up their views on vaccines (although I do hope I’ve planted a kernel of doubt). I’m not sure if that was ever the goal, however. If I am being honest, I have seen the biggest change in myself. I am no longer the woman who sat at home Easter Sunday wishing my world were a better world. I am saying something to make it a better, safer world. But I can’t do it alone.

If any of you out there are fretting and wishing, you need to say something too. Explain how scientific study works and that vaccines have been thoroughly studied. Explain that you trust your doctor. Explain that your son/daughter/niece/nephew/third cousin cannot be vaccinated and depends on the rest of us. I know you’re scared you’re friends will hate you. I know you’re “just” a parent. I know you probably don’t have a sick baby to defend, but sick children are out there in your community. Protect them. Stand up for them.

Denise Olson is “just a mom” living in Arizona. She stays home with her four children, ages seven, five, four, and two. She is happy to report that the two-year-old is now fully vaccinated.