It was September of 1951, the year I was born. I was only five months old — too young to remember the details — but as I grew older I watched the aftermath. My mother often told me the story of the worst day of her life.

My brother, Mike, was in kindergarten. It was a warm day and he was off to school. He fell on the porch. My mom thought he was just having a clumsy day. She watched him walk down the lane to the school a block or two away. He stumbled again as he came to the footbridge that led across a stream at the end of our lane. The same stream he’d fallen into the day before while looking for frogs and pollywogs. The stream we were forever after forbidden to play near. The stream my parents claimed contained raw sewage. The stream that they believed made my brother sick.

A few hours later, the school called. There was something wrong with Mike, and someone needed to take him to the doctor. The school was near the hospital. I imagine my mom, who didn’t have a car, rushing to the school, pushing me in a carriage and carrying Mike to the nearby emergency room. This was the height of the polio scare and she was terrified. My dad, called home from work, met her at the hospital. They sat, frightened beyond speaking, while I napped, oblivious.

Our family doctor, Dr. Clarke, came out of the exam room. He walked to my parents and enveloped them in a hug. Tears in his eyes, he said, “It’s polio.”

Mike was sent to a county hospital in Portland, Oregon, about 50 miles from our home in Washington. The trip to Portland took about two hours in those days on the country road. There, my mom was sent to the admitting office where the clerk was taking down the pertinent information: Age, date of birth, religious affiliation, address. My mom said she could barely remember the facts, her head was spinning with such fear. Would I get sick? Mike had played with me and had carried me around that morning.

Then the clerk asked my mother another question:

“What do you wish done with the remains in case of death?” My mom said something broke in her. “I don’t know. I don’t know. I don‘t know.” She said she just kept repeating those words, over and over. The clerk stopped her questions. “We can do this later,” she said kindly.

Mike had been ensconced by then in the Polio Ward with other children. Some were in Iron Lungs, others seemed fine. Most were wailing. Mothers were not allowed in — it was too upsetting to the sick children. (Fathers were allowed, but only to look through the window, not to be in the room.) My parents were assured that siblings of the stricken rarely got sick, but there were no guarantees.

My dad had to work, but he went to the hospital every weekend where he waved at my surprisingly cheerful brother through the glass window. He watched the treatments, the stretches, the moist hot towels. He watched the other children wail and weep. My brother was one of the fortunate ones. The polio affected his right leg and foot and his stomach muscles.

Eventually, my brother came home. My earliest memories are of his nightly exercises and stretches to lengthen the shriveled tendons and muscles in his body. Over the next several years Mike had at least five surgeries to lengthen the tendons in his leg and foot. His foot looked drawn up as if it had an extremely high arch and that foot and leg was shorter and thinner than the other, even after the surgeries. He walked and ran, but always with a limp.

We lived on a small farm. We had milk cows, beef cattle, a huge garden. Our lifestyle was as natural and as healthy as it could be. We had virtually no processed foods. Our immune systems were as strong as clean living, outdoor exercise, and loving and caring parents could make them. It was no protection against polio.

As soon as vaccines were available, we were first in line. I was unafraid of the needles because I had seen only too clearly the alternative.

We were a lucky family. My brother was left with a limp and now uses a scooter to get around because of Post-Polio Syndrome. But he lived and he walked. 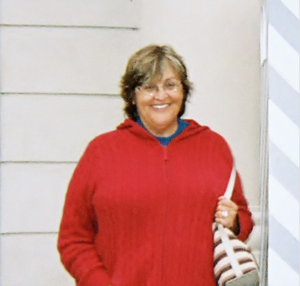 Young parents who think vaccines are dangerous and find the world a healthy and safe place for their children don’t understand the dreadful swiftness a healthy child can be cut down. Loving your child means protecting them from the ghastly effects of diseases that can maim and kill the healthiest, most loved child. Don’t learn this lesson the hard way. Protect your child. Complacence can be deadly.

Gayle Neyman is a retired journalist, granny, artist, and traveler who spends part of her year in Vermont and part in Colorado. She has two children, four grandchildren, and two dogs. All vaccinated.