We got our flu vaccines before I found out I was pregnant.

Our provider had their flu clinic in September, and we all went. It’s an annual ritual at this point. The line was long, and our little boy ran back and forth from us and (as usual) chatted non-stop about a whole variety of things until it was our turn. He didn’t approve of the process. Well, he was intrigued by mommy and daddy getting the shots, but naturally he didn’t think he should be included – though after he got the nasal spray, he shrugged it off and went back to telling us about the world outside and his internal world, which, like the boy, seems never to stand still. Now we were all protected from a dangerous illness.

Well, as protected as we were going to be this year. Because one of the strains mutated, this year’s vaccine has pretty low effectiveness. Better than no protection, but still worrisome. 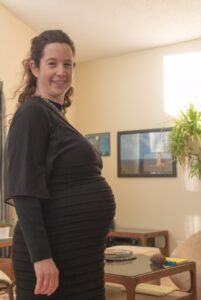 I found out I was pregnant two weeks later.  Another reason to hope I avoid influenza and be grateful even for the protection of the less effective vaccine.

The joys of morning sickness and being horribly tired were punctuated by having so many things to do. My life was not as busy when I was pregnant with my older son. Immunization was just one more box on my checklist. Because I had begun some vaccines before becoming pregnant, I got the last dose in my Hepatitis A series before the first trimester was over, and of the Hepatitis B series during the second one. I started both before getting pregnant and knew it was safe to finish them during pregnancy.

I had other vaccine-preventable illnesses to check on, as well. The doctor also ordered test to see if I was immune to the MMR viruses and varicella: Yup. As the measles outbreak spread, I was very glad not to have to worry about catching either measles or chickenpox – either of which could harm my child. I discovered that my immunity could be passed along to my baby and might protect him in his first 6-9 months, too.

I started feeling baby kicks early, and we told our son just in advance of our 20 weeks ultrasound. He came to the ultrasound, and watched the baby moving – very much – on the screen. He was worried that a shark might get into mommy’s belly and eat the baby. That was not one of my own or my husband’s main concerns, but we did our best to reassure him.

I received my Tdap (tetanus, diphtheria, and pertussis) in early April. I’m glad I can do at least that much to protect my little passenger from pertussis. In some ways, the pre-vaccine advocacy days, when I knew less, were easier. Now I’ll worry about vaccine preventable diseases in those first few months. Such illnesses I really don’t want for my vulnerable newborn, all of which could be very, very dangerous for him. And in a working family with an older child in school, you can’t quarantine a baby. Can’t do much about many of these diseases in the early months except breastfeed (that’s not the only reason to breastfeed, of course – just one of many), but getting the Tdap – safe and effective in pregnancy – helps with the concern.

My son told all his teachers he’s having a baby brother. He’s very, very, very excited. My husband and I have more mixed feelings. We are excited, and very happy. But grown-ups have a list of concerns in these situations. Will all go well for the rest of the pregnancy? And childbirth? What will moving from one to two children do to our already stretched schedule, will we have time for everything: work, kids, and so forth? Will there be time for just us? What will the sleep situation be like?

Maybe most important, will our little guy be healthy? What can we do to care for him and protect him?

Being a parent comes with a whole set of worries.

Given the vaccine-related work that occupies most of my day, I value the modern medicine that gives me a safe, effective way to protect my baby from so many previously dangerous diseases. Some scourges of the past I can be confident my child will be safe from relatively early, as we follow the recommended schedule. Others diseases, I know his vulnerability will be temporary. While there’s always a tiny risk of vaccine side effects, I know that my son is much more safe getting vaccinated than being in my car, hanging around the house (yes, accidents happen at home), or starting to eat solids. To paraphrase The Princess Bride, life is risk. Anyone who tells you differently is selling something. But vaccines are one of the least risky things my son will face – and one of the ways to reduce the risks this big world imposes on him.

My husband and I are lucky, and privileged, to have the option to do that.

Dorit Reiss is a professor of law at the University of California, Hastings, and has spoken widely and published several articles about the law and vaccines. She is also a valued member of Voices for Vaccines’ Parent Advisory Board.