“To each their own.” That was always my mindset regarding vaccinations. I have always vaccinated my children, but I figured it was no harm to me if you chose not to vaccinate yourself or your children.

However, that mindset quickly changed this winter.  My fifteen-week-old son, Colton, developed a bit of a cough.  At first I just assumed he caught it from one of his older brothers (twenty-two months and three and a half years old).  But within a couple days I was worried as the cough was getting worse.

So I took Colton and my 3 ½ year old to our family Nurse Practitioner.  She said that my oldest had what she thought was influenza and my youngest had a bit of pneumonia, so she prescribed some antibiotics to help.  She said if the cough got worse or didn’t get better within twenty-four hours to go to ER.

That night I let Colton sleep in his swing to keep him a bit elevated, and I slept by him on the sofa.  Throughout the night he kept coughing.  So the next morning I took him to the nearest children’s ER.  The nurses immediately seemed concerned with his cough.  After seeing Colton, the ER doctor said he had bronchiolitis, but with an inhaler and some saline drops we were good to go home.

That weekend Colton again seemed ok—didn’t get better but wasn’t worse.  But the cough was still there.  On Tuesday, Colton’s breathing seemed a lot quicker than it had been, so we took him to the local ER. We were told that while his breathing did seem labored, his lungs sounded clear.

Over the next few days, we watched him closely. The cough seemed to be improving but he was starting to drink less.  On Friday morning I brought him back to our Nurse Practitioner.  She said that although the cough was still present, he wasn’t dehydrated and there wasn’t much we could do.  So I took him home feeling very frustrated and just wanted my baby to get better.  I was also feeling emotionally and physically drained. 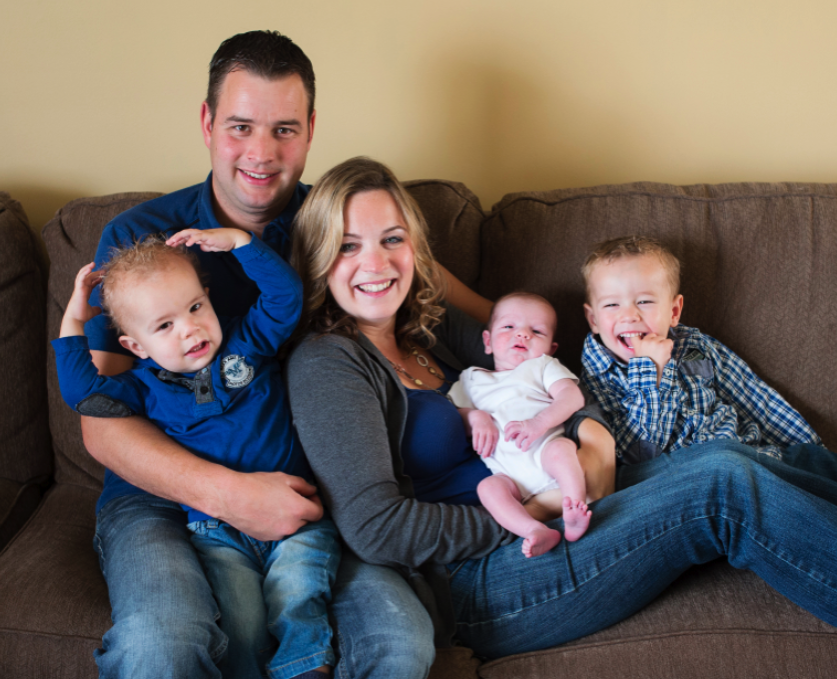 We gave him a bottle, and after finishing it, he began coughing and vomited. We comforted him and waited a while before trying another bottle, and putting him in his swing. About twenty minutes later he started coughing and turned slightly purple.  My husband jumped up and got him out of his swing.  Colton continued to cough and then turned a blue/purple color in the face that also spread down his neck (thankfully couldn’t see anything else as he was wearing his pjs), and then he threw up a bit and took a big breath in. Color came back slightly, but then he started coughing until turning blue/purple again.  He did this four times before we were able to get to the ER.

When we arrived, I knew things were different this time. I told  the first resident what had just happened, and he explained how sometimes newborns can turn slightly blue when eating.  I knew this, but I insisted this was different. This was a child unable to breathe—and he wasn’t slightly blue–he was blue/purple.

The resident left and returned with the attending physician, who  said she was concerned Colton had whooping cough, so therefore he would be admitted to the hospital.  She said I had to stop feeding him at once, that he would be getting IV fluids to reduce the chance of him choking and or aspirating into his lungs, and they also wanted a chest x-ray done.

After the chest x-ray, which was hard on everyone, Colton and I went back to his room in the ER.  He started another coughing fit, which ended in him vomiting all over the bed. I remember after he stopped I just broke down crying.  I hated all of this and just wanted some answers and wanted my baby healthy.

I don’t remember much of that night—they put him on oxygen put in an IV, and gave him an electrocardiogram The next morning the new nurses came in and said Colton was off oxygen because he seemed to be breathing well on his own.  This was great news!  They also said that the test results for the whooping cough can take a few days, but they started him on the treatment for it anyway instead of waiting (which, I later learned, is not standard procedure at all hospitals).

The residents came in later that morning and said that Colton seemed to be doing much better, but said that he did have pneumonia in both of his lungs.  So we would be staying for sure another night and they wanted to continue to do IV feeding until Sunday.  The rest of the day was great. I remember Colton slept a lot of the day. He didn’t have any episodes so I was almost hopeful that maybe we would be going home on Sunday.

The next morning was Sunday. After a visit from my husband and the two older boys, I was changing Colton’s diaper on the bed when I noticed he was coughing a bit, so I stopped and sat him upright.  The coughing continued, and he wasn’t able to break the cough. Then his color turned.  I remember screaming for help: “Someone help my baby, PLEASE someone HELP MY BABY!!!”  Within seconds (although it felt like eternity) all the nurses came running into our room.  They had to peel my arms off Colton, and took over.  One student nurse actually was comforting me, which was so sweet and very much needed.

Within minutes my son’s color was back and his oxygen level was at 100%.  His main nurse was holding him when all of a sudden Colton just started belly laughing.  I’m talking about a deep, right from the belly laugh, and it was just what we all needed to hear.

The residents did their rounds that afternoon and they all agreed they didn’t think Colton had whooping cough.  Although this was a huge relief, it also left a lot of unanswered questions. That night they started doing chest physiotherapy, and using an inhaler on him every 4 hours.

Over the next few days, Colton improved dramatically. We learned that his pertussis test was negative, but that in addition to pneumonia in both lungs, Colton had Influenza A.

Finally, we were told we could home.  I was so happy, and couldn’t wait to get home and snuggle all of my boys together.

Before Colton got sick I didn’t care whether people vaccinated their children or not.  We choose to vaccinate, but never got our flu shots. I always figured we would be fine.  We weren’t. I chose not to get the flu shot, and because of my decision I also put my son’s life at risk.  I’m deeply grateful that Colton made it through this terrible experience, but it was a very hard lesson—one that taught me that vaccination is vitally important, not just for my children, but for everyone’s.

Shannon Steen is a mother of 3  busy boys (4 years, 2 years, and 5 months) and  married to a dairy farmer. While staying home her three boys, she also runs a part-time photography business. Shannon looks forward to riding her two horses this summer.