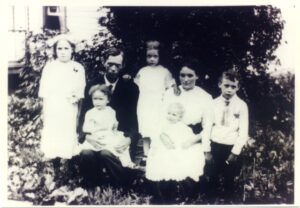 I’m sure many mothers can relate when I say that family is my world. My extended family tells me where I came from. My parents helped shape who I am today. My sister was my first friend. My husband is my teammate. My children are my legacy. Family is one thing I will never tire of investing in (though I do have my moments of needing a break), and my children are one thing I will always fight to protect.

I recently got the chance to visit my husband’s family in Virginia. I love knowing our roots, so going through old letters and pictures was a must for me as I spent time with his grandma, Virginia. Seeing her eyes go distant as she spoke of memories from her childhood made me realize she was reliving every moment she recounted, from the good to the bad. It was almost like living through them again with her. I walked down memory lane with Grandma as she told stories of her late husband building churches with his bare hands, funny road trips with four daughters, and the whirlwind of moves she made all over the country with those four daughters. She pulled out a big three-ring binder full of photocopied letters, pictures, and every bit of information available on her eleven brothers and sisters. Grandma started down the list, telling about each sibling, who they married, where they went to school, where they lived, where they died, etc.

However, when she got to her sister Dovie Martin, she paused before sharing that Dovie (born January 4, 1902) died at the age of fourteen. Her sister, Ivy Martin (born April 24, 1912), died at the age of four. The sisters died on the same evening, February 29, 1916, in their home, from measles.The sisters had contracted measles from their pregnant mother, Lillie. Lillie survived, and gave birth to baby Pansy five days later, on March 5, 1916.

I took a moment to let this sink in. I thought of my own children, and of what it must have been like for Lillie, pregnant, holding her daughters as they died. To know that the baby that you are carrying is probably going to die as well.

This was the reality of measles in 1916. Measles and other (now) preventable diseases were nothing to be messed around with. You didn’t weigh the risks with the benefits, because the risk was that you most likely died if you got the measles. “Natural immunity” was not sought after, and any sort of pox was avoided like the plague, because, well, it was a plague.

Lillie did not have a blog, or Facebook, or even a phone to share what was going on with her family as the nightmare unfolded. But I do. I have a voice to counter the nonsense and the noise of the antivax community. I have science to back up my choice, and I have the story of Dovie, Ivy and Pansy Martin to share. It doesn’t matter if my voice is small. After hearing this story and seeing how it directly affected my family, I will not stay silent.

My daughter Aubrey is five, close to the age Ivy was when she died. I can’t imagine burying a child, especially today, from a vaccine-preventable disease. Back in 1916, there was no vaccine for measles. When I asked Grandma what she thought of people who didn’t vaccinate their children, she seemed shocked that some would choose that. For her family, the measles equaled death. There is no debate on that fact. To Grandma, a vaccine for measles and other diseases she lived through is a precious commodity. She reminded me how lucky I am to have had children in 2007 and 2010. She reminded me not to take them or their health for granted.

The risk of these diseases is real. It is not to be messed around with or “researched” with the search bar. This is life and death, folks. Dovie, Ivy, and Pansy Martin were robbed of a full life. They missed out on friends, school, marriage, children, and grandchildren. Thanks to science and a tireless effort from vaccine advocates everywhere, measles will not be what robs my children of those joys in life, but that’s because I vaccinate them. Next time you want to weigh the pros and cons, imagine burying your children when you could have saved them, because honest research includes pros and cons from both sides, and this—preventable death of children—is a con of not vaccinating children. To me, it’s an easy choice.

Jessica Acevedo-Parker is a work-at-home mother and wife with a Bachelor of Science in Human and Family Services. She lives in Oklahoma and is the proud mother of two young children.