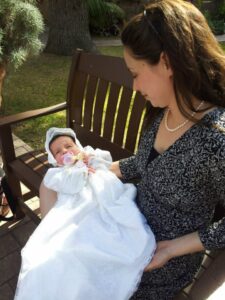 I remember the day I miscarried. I remember reluctantly accepting that the last shred of hope for the pregnancy was gone. I remember being in awe of how I could feel such a loss for a child whom I didn’t even know existed until it was all but certain that I was going to lose her.

A few weeks later, a couple friends mentioned how The Greater Good influenced them to stop vaccinating completely. I had always been nonchalant about selective and alternative vaccination, having dabbled in that myself after reading The Vaccine Book. (As an aside, how Dr. Bob can  state that his book doesn’t adversely affect vaccination is more incredible than his lack of humility and scientific acumen in my opinion!) At that time, I figured any kind of vaccinating was a personal medical decision and “parental rights” issue.

But, then I heard the word thimerosal and the alarms went off. I knew that the mercury-autism link was bogus from reading I had done prior to the birth of my first child. If they were obviously peddling an untruth in one part of the movie, what else were they distorting? Since I had more scientific disposition with a B.S. than my liberal arts friends, I decided to delve in.

What followed changed me in ways I couldn’t have fathomed.  I went down all the rabbit holes, read every study I could access, read every criticism, every defense.  I acquired megabyte after megabyte of papers, articles, and studies, even going so far as to personally break down the anthrax, pediatric, and anti-vaccine “it” guy Chris Shaw’s mouse-model schedules into aluminum ion content by mass, and then reworked it when I realized everyone other than Shaw talks about total aluminum salt content. Every lie had to be scrutinized. Yes, I was a woman possessed.

I knew my demon. It was visceral, overwhelming empathy that drove me. I was still mourning for that little life that might have been. But I never held the child I lost. How much greater the pain—how much greater the loss—for arms that had! Every story of loss from vaccine-preventable disease made all the science and statistics real. I saw myself in every parent who’d lost a child; every child victim of a vaccine-preventable disease was my own.

How had I slipped so far away from the critical thinker that I identified with during my university education and naval career? The truth is that we all gravitate towards people who have similar thoughts and values to our own. If you see a person or group with real insight and wisdom in some respect, it doesn’t easily register that they can be incredibly unwise in another respect, especially if it naturally progresses from inherent, common biases.

The anti-vaccine crowd has an appeal for everyone in my circles: Distrust of government for the conservative Republicans. Aversion to the “unnatural” for the California crunchies. Philosophical aversion to “nanny state” mandates for the Libertarians. Appealing to a God-given role in the stewardship of their children’s lives for Christians. Distaste and disdain for the mainstream for the homeschoolers. Counter-cultural appeal for the Catholics. And when you have “skeptics” conflating all sorts of (opposing) political, philosophical, and religious arguments with science, scientific truth becomes just another objectionable opinion.

“What about the parents of vaccine-injured children?” one might ask. Do I not feel empathy for them? At first, I blamed myself for the miscarriage; it had to have been something I did or didn’t do. My husband rightly told me that those thoughts weren’t very rational. Yet, I screamed at him to let me believe I caused it so that the world could “just make sense again!”  The parents of “vaccine-injured” children are not much different. They’ve experienced a misfortune for which they are desperately looking for something to blame, something to answer “why,” something to make it different. I see myself in them, too.

The journey has had discouragement, but also great hope. Despite the cultural and peer pressure, quite a few mothers expressed their support and their gratitude to me for countering anti-vaccine arguments with links, data, and logical arguments. Something as simple as paraphrasing Dr. Crislip’s vaccines-as-seat-belt argument gave one mother the confidence to give her child the MMR vaccine. After creating a Powerpoint presentation, even a mother trained in traditional Chinese medicine, one who might automatically be considered “lost” by some in vaccine advocacy, reconsidered vaccinating her children. I’ve gotten many emails, Facebook messages and lost plenty of “me” time to answer anyone with a question, assuring them that if I didn’t have the answer, I would help them find it. And, while I didn’t quite appreciate how patient they were with me during my insensitive initial delivery and how hard it must have been for them to change, my friends were convinced that vaccinating would be the right and reasonable thing to do.

When I became pregnant with my daughter, I gladly welcomed my flu and Tdap vaccines to protect her. Yet, I still fear. I fear that she is so small in a world that might need to see children like her suffer and die en masse before we value herd immunity and vaccination again. I fear that I can’t give our family a life worth living and fully protect her from diseases that kill. I fear that I can’t fight this invisible enemy. But in this life, this is one battle that must be fought and won.

Laura Calise is a Catholic stay-at-home mother and a former Naval officer who plans to homeschool her two children.  She lives on the west coast and holds a BS degree in Technical Writing and Communications with a minor in Engineering Studies.