I was raised in a family where it was traditional to challenge authority and the status quo, to buck trends and conventions, and to always ask questions. I had friends who didn’t vaccinate their children, and family members who questioned the number and spacing of vaccines on the current schedule. So I went into motherhood with what I thought was healthy skepticism regarding vaccination. When I became pregnant with my first daughter, I wanted to do the right thing by investigating the safety of vaccines before making a decision.

But during my investigation, I made a mistake: I purposely sought out anti-vaccination books and online material. The way I figured it, of course the pro-vaccine side was going to say was immunization was safe and that people against vaccination are a bunch of quacks. So I decided to look into the arguments against vaccination—and I didn’t have any trouble finding what I was looking for.

I already knew about Wakefield’s claims of a link between MMR vaccines and autism, and was an occasional reader of the Mercola website. Online, I found Sherri Tenpenny, Barbara Loe Fisher, and a plethora of “crunchy” mom blogs that railed against vaccination. I even found a local pediatrician who doesn’t vaccinate his patients, who told me that he vaccinated his first two children, and they turned out to be the “least healthy” of his nine kids. (I didn’t know at the time that he’d also lost one of my state’s largest malpractice lawsuits—he has shifted from pediatrics to some kind of holistic nutritional practice that sells supplements.)

To a relatively informed and skeptical person like myself, a lot of the arguments against vaccination seemed to make intuitive sense: I was willing to buy the suggestion that the rising rates of allergies, asthma, ADHD, and autism coincided with the increased number of inoculations children receive today.

Eventually, I came to believe other parents—those who vaccinated—didn’t have my special investigative skills. They didn’t stop to question. They were sheeple who just followed the herd. I, on the other hand, had taken the time to research all this, and by the time my first daughter was born, was pretty confident that I had made the correct decision not to vaccinate.

Two years later, I gave birth to twins, and was suddenly very overwhelmed. I felt a new sense of vulnerability. If one child got sick, I quickly realized, they’d all be sick. However, somewhere deep down, in an unacknowledged place, I knew that my children had a low risk of contracting vaccine-preventable diseases—precisely because vaccination is effective. I had a faith in herd immunity while still questioning its very existence. I suspected that my children were hiding in the herd, beneficiaries of others who chose to take on the risk of vaccination. And although I wouldn’t admit it, I had mixed feeling about that fact. 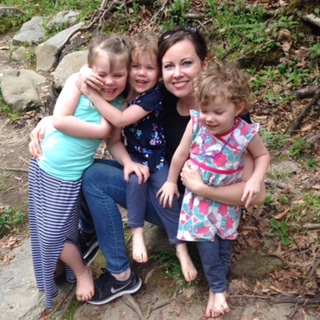 Then our whole family contracted rotavirus late in the winter. It was a nightmare. It was horrible to see my daughters hunched over on the toilet, crying from the painful cramping that lasted a week after the acute illness. Once I realized what we all had, and that it could have been prevented with a vaccine, a spark of doubt began to grow.

A couple of months later, the California measles outbreak was in the news. I always thought that if there were a major outbreak of disease that could potentially put my girls at risk, I’d have to rethink my position on vaccines. My maternal grandmother is deaf in one ear due to a measles complication. I certainly didn’t want that for my girls. That spark of doubt turned into a conflagration. Unlike most anti-vaccine activists, I understood and accepted that vaccines were probably pretty effective. I knew that herd immunity had to be a real thing, and I knew that my daughters were likely beneficiaries.

Then at the end of the school year, my daughter’s preschool sent home a letter stating that, in light of the measles outbreak, vaccination was now a non-negotiable condition of enrollment, effective the following school year. In addition, my husband began pressing me to remind him why the girls weren’t vaccinated. It was a perfect storm of events, leading to a completely new perspective.

At that point, I allowed myself ask the question: what if I researched with the opposite bias? What if I instead looked for confirmation of the efficacy and safety of vaccination? I read several books by Paul Offit, who suddenly went from Big Pharma villain to affable, knowledgeable, and indispensable conveyer of scientific truth. I listened to the audio book of Panic Virus on a long road trip, which blew to pieces my prior understanding of Andrew Wakefield and his fraudulent study. I read On Immunity by Eula Biss, and through her beautiful and empathetic words allowed me to let go of the idea that I could control the level of risk my children were exposed to.

I let go of so much fear, and, finally, armed with a whole new perspective and tons of information, I was able to trust that vaccinating my girls was the right and safe thing to do. Within days of making the decision, the girls had appointments with a new pediatrician who, with my consent, put them on an aggressive catch-up schedule. They are now fully vaccinated.

Today I see the anti-vaccination movement as the embrace of an associated collection of beliefs. It starts with an understandable desire to minimize the risk we expose our children to. It feeds on fear and mistrust of our government and the agencies it oversees. It benefits from our collective short-term memories, forgetting or never even knowing what it was like to fear diseases that have been nearly or completely eradicated throughout the developed world. It incorrectly makes the assessment that the passive risk of not vaccinating is less than the active risk of vaccinating. I am frustrated with the amount of misinformation I encountered when I set out on this journey, but in the end I am thankful, for the sake of my children, that I was able to reassess my position and accept information that is based on well established, sound scientific evidence.

This week I enrolled my twin daughters at the same preschool our oldest attended. As I copied their medical forms, which show they are fully immunized, I smiled, proud of those forms. They stand as evidence that I have done the single best thing I can to protect them from disease. And in turn, my girls are now helping protect children whose parents have chosen not to vaccinate, and those who cannot be vaccinated. I will forever be grateful for the protection the herd provided to my children when they were young and vulnerable. I am proud that they are now contributing members, providing additional strength to our collective immunity.

Kristen O’Meara is a mom and special education teacher who lives outside Chicago.

Editor’s comment: Become a Voices for Vaccines member to learn more about how you can make a difference in your community in the battle against vaccine-preventable diseases.