It was 1998, and the chickenpox vaccine was just coming out. At that time–the chickenpox vaccine became available in 1995—my daughter was four and completely up-to-date on all of the recommended vaccinations. However, I didn’t see the point of taking her in to get that one—I mean, chickenpox was no big deal, right? I was a stay-at-home mom, so taking time off work if she caught it was no big deal. Why go to the trouble?

That February my son was born—fifteen weeks early. He weighed just over one pound and had to spend weeks in the NICU, as he couldn’t breathe on his own, couldn’t nurse, or really do anything besides try to survive and grow.

I was told that because my daughter wasn’t vaccinated for varicella, and hadn’t contracted it and therefore acquired natural immunity, she couldn’t come to the NICU to see her new baby brother. This was both for his safety and for the safety of all the other babies in the NICU. I had to explain this all to her—how, in order to see him, she had to get this shot that would help keep her from getting sick, which in turn would help keep her tiny baby brother and the other babies in NICU from getting sick. This was especially important because if any of these babies contracted chickenpox, they could die. 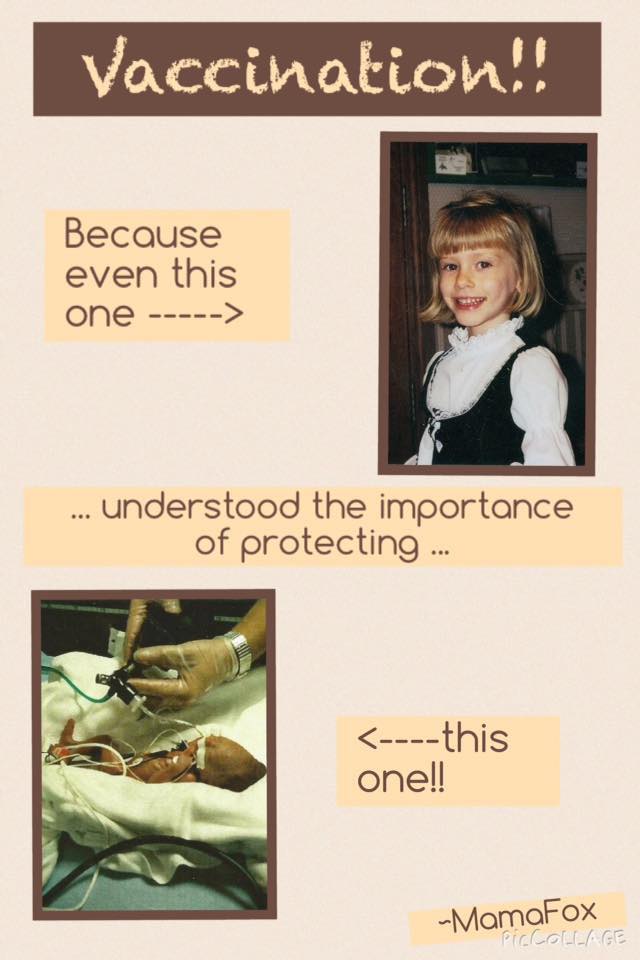 I left the choice up to her. Each week, I asked her if she wanted to go in and get that shot and, being four, each week she said no. This went on for three weeks. On the fourth week, she said yes, she wanted to get the shot. I asked her why she’d changed her mind, and she told me that she really wanted to meet her baby brother, but she didn’t want him to get sick. So she was ready for her shot.

A week later she got to meet and hold her little brother in the family room attached to the NICU. Another week after that she was able to actually be inside the NICU with me.

Please vaccinate your children. Your decision will have positive effects that go beyond your own kids. If a four-year-old can understand, in the space of three weeks, how important it is to protect others, why can’t full-grown adults?

Ami Fox runs HistioMom, dedicated to increasing awareness of Langerhans Cell Histiocytosis. She is the mother of three children and a nursing student.