My parents were brought up listening to the radio broadcasts and reading the literature of the Worldwide Church of God, a cult/fringe religion that was developed from a mishmash of Seventh Day Adventist doctrine, revived Old Testament traditions, and prophecies/conspiracy theories about what happened to the Israelites and when Armageddon would rain down on Earth. Though my parents say they were “chosen” as church members, I can’t ignore the early influence of The Church (as we called it) in their choice of religion. My parents had strange, unhappy childhoods, and I think The Church gave them a sense of community and belonging; they were part of a select few who had “seen the light” and were special to God. 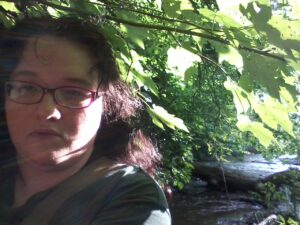 There were a number of restrictive policies in place to foster a sense of sacrifice among the Church’s members, policies which were interpreted as a way to be separate from the world and closer to God and the people in The Church. One of these was faith healing, including both techniques to bring about healing and reliance on God to provide good health. Vaccines were prohibited, because they were seen as emblematic of a lack of faith in the power of God. If you got sick or even died, that was God’s choice for you, and you should accept your trial without complaint.

While I believe my father was probably vaccinated as a child, I know my mother only received a smallpox inoculation from the government due to an outbreak of the disease in her community. I suppose the fact that she was unvaccinated was due to a combination of a lack of health care in general and her parents believing somewhat in the doctrine of The Church which reached them even way out on their rural West Virginia farm through radio and mail.

Mom fell ill as a high school student, but still received no vaccinations after the extremely high fever caused her to miss day after day of school in her delirium. She missed so much school that she had to drop some of her classes, and she barely graduated. As a young adult, she moved away from home, officially joined The Church, and married my father. (They met at a church convention.)

My mother got pregnant with her first child, a daughter. At some point in her pregnancy, she contracted mumps at a church convention–probably from another unimmunized church member. When, during a routine checkup, my mother’s doctor recommended a c-section, my mother sought a midwife for a home birth. Neither the doctor nor the midwife told my mother about any possible complications from her mumps infection.

The baby was stillborn. The placenta was black; the fetus had been dead for at least a couple of weeks in utero. If the baby hadn’t been stillborn, my mother told me later, it like would have suffered severe birth defects (most likely, a severe mental disability) due to the mumps infection. Despite this devastating experience, Mom still opted to forgo vaccinations after having a stillbirth that probably could have been prevented.

Later, my mother gave birth to a boy, my older brother. When he was about a year old, he developed a horrible cough, which left him red-faced and gasping for breath, a cough with a shriek in it–a cough that was haunting to witness. Another toddler in the church had the same awful cough. Despite the harrowing experience of seeing her infant, and another young child, grapple with pertussis, my mother didn’t vaccinate herself or my brother.

Years later, my brother and I finally got vaccinated–but only because he wanted to go to a church camp that summer. The Church had changed its policy on vaccinations after a measles outbreak at the camp the summer before. As a church with an international member body, unvaccinated kids could bring in diseases from all over the world and it would spread like wildfire through their unprotected bodies. I wasn’t going to camp, but Mom took us both to the doctor, and we got shots in both arms and legs and squeezes of polio vaccine in our mouths. We were caught up after all our unprotected years because The Church had changed its mind.

With this kind of background and experience with vaccines, I have been disappointed, but not surprised, to see anti-vaccine sentiment on the rise in the U.S. again. I understand the desire to separate from the mainstream, to be part of a select few who “know the truth.” There are many things that make people vulnerable to the idea that different must be better, that a small group is privy to esoteric knowledge, that a conspiracy theory to the many is gospel to the few.

I doubt any science would have convinced Mom to give us standard preventive health care; she had access to more anecdotal evidence than most people that not being vaccinated is tremendously dangerous, and yet she didn’t defy her religion to go along with the masses. Though anti-vaxxers these days usually cite specious research, influential celebrities, and the supposed plots of Big Pharma as reasons for not vaccinating their children, their arguments, when you strip them down to their foundations, are just like Mom’s. Anti-vaxxers claim they’re no slave to dogma, but they’re just looking for gods to follow at the end of the day.

Facebook has been good and bad for spreading my personal anecdotes and scientific examples supporting vaccination. I posted a status update about how I was angry that people didn’t vaccinate, and a “friend” took offense and had me kicked out of a small group in my current church because she couldn’t deal with my opinions on how parents who don’t vaccinate according to current standards are neglecting the health of their children. She claimed that I was attacking her rights as a parent to raise her child as she saw fit, and went to the group leader to have me removed from the group. The group leader could have stood up for me, but one of us “had to go.”

I explained to some members of the group why I had been kicked out of the group, and one man listening to me took issue with me saying that the anti-vaccine arguments were illogical, especially the one that “vaccines cause autism.” I said that a relationship in time doesn’t imply causality; just because autism symptoms usually appear around the time of vaccinations doesn’t mean that the vaccinations caused the autism.

He punched me in the arm and said, “I punched you and now your arm hurts. A caused B.”

I’m pro-vaccine. I believe I was neglected as a child by not being vaccinated. I went to Disney World as an unvaccinated four-year-old. What if somebody with the measles had been there at the time? What if I had caught vaccine-preventable diseases from other church members? I know from science and family history that unvaccinated people are in danger of very serious diseases. I don’t know how to combat the willful ignorance of anti-vaxxers. I don’t know how to combat religious belief that makes people think that not vaccinating proves faith in God. But I’ve learned from history, and if nothing else, I want to strengthen the resolve of those who agree that vaccines are safe, effective, and necessary. With all the real problems in the world, convincing people to vaccinate shouldn’t be a war that we have to wage, but it’s real and we have to do something about it.

Emily Whetsel is not a parent, but is a passionate advocate for vaccination as a society member and former unvaccinated child. She is a writer and editor living in East Tennessee.