I have always been pro-vaccine. My father worked in International Development, so I grew up and traveled all over the world in my youth, meeting children my age who had suffered from diseases that most of my friends back in Canada were lucky never to have even heard of. Later on, when I was going through my training as a midwife, I completed my pediatrics rotation during a whooping cough outbreak, and saw first-hand the horror of a disease that thankfully so many of my generation will never have to see. I have worked as a volunteer in clinics and hospitals in West Africa, Central, and South America and seen the desperation and fear of parents who have brought their children from miles away to have them vaccinated against scourges that are all too real for them.

I have also had the unfortunate experience of contracting a disease that scientists are working to create a vaccine against. In 2005, I spent several months volunteering at the clinic in a Ghana refugee camp for people displaced by the Sierra Leone Civil War. Refugee camps being what they are, there was an outbreak of tuberculosis. Although I had been vaccinated as a child, the BCG vaccine is not known to provide adults with immunity, so I contracted TB as well. Thankfully, I had access to excellent health care and recovered quickly, but my left lung is permanently scarred, and I know that if I ever become severely immunocompromised, the latent TB in my body could become active TB and cause more damage. 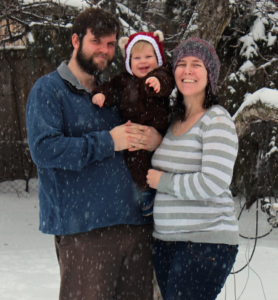 When my first son was born, there was no question that my husband and I would vaccinate him, and on schedule. My husband has never had any doubts about whether to vaccinate or not– his parents are both doctors, and his mother was, in fact, one of the doctors present during the care of the patient with the last naturally acquired case of smallpox in Britain.

However, I was also of the “live and let live” mindset: my kids were going to be immunized, my husband and I were up to date on our boosters, so why should it bother me what other people decided for their children? I tried to stay away from or ignore Facebook posts from anti-vaccine friends, thinking it was no business of mine what they did to their children. I agreed with these friends on so many other things–my son was exclusively breastfed, we used cloth diapers, we co-slept, we never used a stroller, preferring to wrap and wear him–so why should it bother me that we disagreed about vaccines?

Fast forward to my next pregnancy. At a routine ultrasound, I heard a phrase from the technician that I knew was code for “there is something wrong with your baby”: “I can’t get a clear view of everything I need, so you’re going to be referred for further testing.” After a fetal echocardiogram a few days later, the diagnosis was made: my baby had a severe congenital heart defect, and would need at least one, if not several, open heart surgeries in the first few years of life, possibly within the first few hours of life.

Suddenly, it was no longer an abstract concept that an outbreak of a completely preventable disease could harm an immunocompromised child: it was going to be my immunocompromised child who could suffer. I remembered how when my older son was a newborn, I was paranoid about every cough and sniffle from anyone who came into contact with him, and he has always been a strong, healthy boy. I remembered glaring at old ladies in the supermarket who would lean over and pinch his chubby cheeks in the checkout line, seeing invisible germs attaching themselves to my precious baby. How on earth could I handle leaving the house with a sick baby? How was I going to protect him?

I guiltily realized something about myself at that point: I had fallen prey to the same selfish thinking that I so abhorred in anti-vaxxers. I had previously thought only of my children and my children’s health. I recalled being angry with a woman who told me that “I’m only responsible for the health of my own children,” and suddenly I could see that I had thought the exact same thing. By not speaking out and promoting vaccines, by not lending my voice to those who were immunocompromised, I was following the same anti-vaccine logic that the only child who mattered was my own.

So I started speaking up. I wrote letters to the editor about the dangers of not vaccinating. I proudly posted pro-vaccine articles and memes on my Facebook page. And I told all of my friends that if they wanted to continue having playdates with my kids and me (and if I may toot my own horn, I bake pretty damn good cookies and cupcakes so there are usually treats at my house) that their kids had to be up to date on all their vaccines. Anti-vaxxers who didn’t know about my son’s condition were angry with me at first, but once they heard why I suddenly seemed so pro-vaccine they quietly slunk away.

Sadly, this is the only tactic I have found works to help change anti-vaxxers’ minds so far: the personal touch. It is much harder to stick to your selfish ways when you are presented with a very sick and vulnerable baby, and a mother who will do anything to protect her child. I can only hope that this story might help challenge others who don’t know me or my family, and make them realize that to exist in a society means we must think of others, and not just our children and ourselves.

And if all else fails, I will turn to humor. When an anti-vaxxer says that they want their children to naturally acquire immunity to diseases, I happily tell them that I have tuberculosis and would be glad to cough on their children. The sudden fear in their eyes tells me that their iron-clad convictions may not be quite so iron-clad after all, and that there is some hope that they will change their minds.

Julia Wykes is a registered midwife who has worked in Canada, Scotland, Mexico, Peru and Ghana. She also holds a Masters degree in Social Anthropology, with a focus on Medical Anthropology. She currently lives in Ontario with her family.