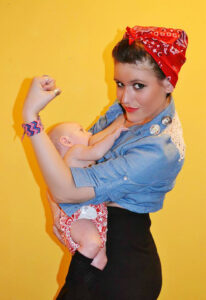 Have you ever strolled by someone in the grocery store who smelled like she just walked out of a package of incense? That was me. I bathed in patchouli oil, smeared crystal rocks on my armpits (and let me tell ya’, people: it doesn’t work). I had Himalayan salt lamps and amber teething necklaces. You name it I had it—and I even stopped shampooing my hair for a month.  I was proud to call myself a “Crunchy Momma” and I was proud to be outside the status quo of mainstream mothering that flooded my little town in central Missouri.

I took it upon myself to educate other parents via social media. I tried to influence people to co-sleep and cloth diaper, for example. And I posted articles on the “dangers” of vaccines. I had two children by this time and no matter what obstacle fell in my path, including school-mandated vaccines, I moved it out of my way. For example, when we enrolled my daughter into preschool I was able to tell the church office that ran the preschool that it was against our religion to vaccinate. I lied to a church about vaccines. Lord, please forgive me!

Now, if you’re thinking to yourself that this lie was no big deal, that you’ve heard people do this all the time in order to avoid the immunization requirement, but to me it was a big deal. I had always been raised in the church, and my mother was extremely religious, so the thought of lying to the church really scratched me down deep. But I justified my lie by telling myself that it had been a necessary one—I had to protect my daughter’s health.

Then a year later it was time to enroll my daughter in Kindergarten. I dreaded the day that I had to go in there without shot records and repeat my lie. In fact, it started to give me so much anxiety that I actually started to doubt myself. One day, a video came through my Facebook feed. I clicked on it and found it was just a video of a mother holding her very young infant on her lap. Then the baby started to cough—and cough and cough and cough, and then hack and cry and wheeze. And then I heard it: the noise that changed my thoughts on vaccines. A mother sobbing.  A terrified mother, scared to death, weeping quietly as she filmed her newborn struggle to breathe because she had contracted whooping cough, or pertussis. 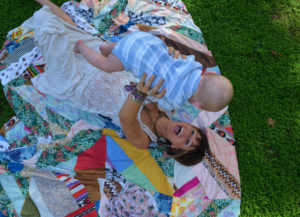 As she tried to control her sobs, she narrated the video by pleading with those watching to vaccinate their children. There is a vaccine for this awful disease. I was stricken with fear and sadness for the mother and sadness for the baby. Every emotion that could have possibly been felt in that moment, I felt. I sat on my bed sobbing.  I vowed that I was going to really do my research on vaccines. So buckled down and dug into the research that would fill the next two months of my life.

In brief, here is what I learned. The anti-vax assertion that “diseases had already started to decline before vaccines were introduced” is a lie.

The idea that vaccines cause many harmful side effects–including death and possible long-term side effects that we don’t even know about–is completely misleading. In fact, most vaccine adverse events are minor and temporary: sore arms or mild fevers. More serious side effects occur only rarely (on the order of one per thousands to one per millions of doses, depending on the vaccine). Some are so rare that they cannot be plausibly attributed to the vaccine itself.

One of the most pernicious and ignorant misconceptions perpetuated by the anti-vaccine movement is that “vaccine-preventable diseases have been virtually eliminated from my country, so there is no need for my child to be vaccinated.” To that I say: tell that to the sobbing mother with the pertussis-stricken infant on her lap. Yes, it’s true that vaccination has enabled us to reduce most vaccine-preventable diseases to very low levels. However, some of these diseases are prevalent—even endemic—in other parts of the world, including Europe. Measles outbreaks in the United States recently have been sparked by unvaccinated international travelers to Europe who have brought these diseases back home with them. It’s also worth nothing that 2016 featured some major mumps outbreaks on college campuses and pertussis cases all over the country.

But here’s the other thing about that: we don’t just vaccinate to protect ourselves. We vaccinate to protect the most vulnerable among us. There are people in our communities who cannot be vaccinated—because they are too young, because they are going through cancer treatment, because they are ill. There are also individuals for whom the vaccine simply doesn’t work. Their only hope of protection from these diseases is you and me–and my neighbors and the rest of my community. We need to be vaccinated in order to lessen the chances that we pass disease on to them.

A successful vaccination program, like a successful society, depends on the cooperation of every individual to ensure the good of all. We would think it irresponsible of a driver to ignore all traffic regulations on the presumption that other drivers will watch out for him or her. In the same way we shouldn’t rely on people around us to stop the spread of disease; we, too, must do what we can.

I was anti-vax, but I was also a mother whose heart broke for another mother in pain. Watching that newborn choke and wheeze and cough sparked something in me—doubt. That spark spread like wildfire. If, as I once was, you are vax-hesitant, I encourage you to revisit your decision not to vaccine or to delay vaccines. Let your own spark of doubt grow—let it motivate you to do more 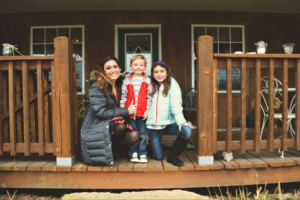 research, as I did. Vaccines save lives.

Courtney Allen is the mother of two children living in Missouri. Growing up in small town America, she was raised with an appreciation for the little moments that make life beautiful, including dusty records, small feet, cheek kisses and the warmth of a mid summer day.