I have always been a mom who vaccinated her children. To me, it’s only natural: if you have children, you want to protect them. And vaccines save lives. 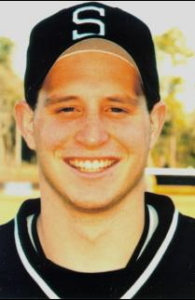 Unfortunately, my son died of a vaccine-preventable disease because I didn’t know that there was  a vaccine for meningococcal meningitis, when my son was a college junior, fourteen years ago.

Evan was a twenty-year-old junior, an honor student, and a pitcher on his college baseball team.  He was the picture of health.  Then he called one day with what he thought was a migraine, and when he was still very nauseated and sensitive to light a few hours later, I asked him to have his roommate take him to the ER.  The ER doctors told us that Evan had a “little virus,” and so he didn’t have to go back to his dorm, they would keep him overnight.

The next morning, our world fell apart.  At 7:00 AM, we were called and told that Evan had bacterial meningitis, with a five percent chance of survival.  We went from a “little virus” when we went to bed that night to a strong possibility that our son would die.

Over twenty-six days, in three different hospitals, meningococcal disease ravaged Evan’s body.  Amputations of both arms and legs were not enough to save his life.  He lost kidney and liver function, suffered ten hours of grand mal seizures, and was eventually declared brain dead.  No parent should have to watch his or her child be disconnected from life support, flat-line, and be carried away.

After Evan died, we found out that the military routinely vaccinated recruits for bacterial meningitis, and that the preceding year the American College Health Association had published reports about links between college students and meningitis.  The bottom line is that our son did not have to die. There were vaccines available that could have saved his life, but we were not told about them.

Since then, I have made it my life’s mission as an original founder of the National Meningitis Association to raise awareness about meningococcal disease, its symptoms, and prevention.  I believe so strongly in vaccinations because they have saved millions of lives throughout the world.  What I wouldn’t give to go back fourteen years and have known about the meningitis vaccine.  I am confident that vaccines are safe and effective.

I am not scared of vaccines.  I am scared about what happens when parents choose not to immunize.  They may be well-intentioned, but they are wrong.  They are putting their child’s life, and those of countless others, in danger.  If you love your children, and there is no medical reason for them not to be vaccinated, then please vaccinate them.  Don’t let your child be another statistic, as my child was.

Lynn Bozof is an original founder and the President of National Meningitis Association. In addition to her work with NMA, she also spearheaded the blog Parents Who Protect and is a tireless advocate for protecting children from vaccine-preventable disease.