It was never my intention in life to become a vaccine advocate. I have to do enough just advocating for my kids, as two of three are on varying degrees of the autism spectrum. Multiple times a year we have to draw up new treatment plans, new IEPs, start calling people out when things are not done the way we need them, making sure no one is trying to circumvent the younger child’s service dog, etc. It’s a tiring process, and I really don’t need anything else added to it.

Then I came to the realization that advocating for vaccines and autistic individuals are, in many cases, becoming one and the same, and I have no choice but to fight.

Despite the fact that Andrew Wakefield’s disastrous and fraudulent study linking autism to the MMR vaccine has been disproven and debunked, there is still a large segment of the population that suspects, or just flat-out still believes, vaccines cause autism.  In addition, there are plenty of fringe groups, “crunchy” parenting boards, Facebook communities, and high-priced celebrity doctors more than willing to prey on those beliefs and scare parents out of vaccinating their children.

In other words, they are using my kids to scare other parents out of not getting shots.

I read through many of these anti-vaccine sites, and I read through many of the comments of articles published about vaccines in the mainstream media, and I was just truly blown away. Vaccines are blamed for everything from common skin rashes to the Sandy Hook school shooting. But the big thing, every time on every group or thread, is autism. Autism is a scourge. Autism is a tragedy. Autism is taking our children away. My autistic child is damaged, I was told, and vaccines are  to blame. The more I read, the angrier I became. 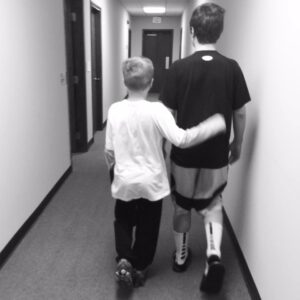 As an autism parent, it offends me my children’s condition is being used to scare people away from life-saving medicine. I don’t want that to happen. It angers me that there are people out there who truly think my children and others like them would be better off dead than just a little different. It’s what the anti-vaccine community has come to in many cases— a hatred of all things autism. I have seen parents like me stand up on this comment threads or in these Facebook groups and state how wonderful their children are and how they wouldn’t trade them for anything only to be told they are foolish and crazy. I have also seen adult autistics make very reasoned and well-constructed arguments on the same points, only to either be completely ignored or called horrible names. I don’t understand how people become that filled with hate and paranoia, and I don’t think I ever will.

Life with autism isn’t all sunshine and rainbows. Aggression issues are no picnic to deal with when your child becomes taller than you are. School is a nightmare when both learn so differently, and both literally scream and fight during homework. When one loves the crowds and excitement, the other one is surely melting down and demanding to go home. Changes in routine freak them both out and I’ve learned to comfort on the fly, big time. Our house is stocked with yoga balls, weighted blankets, fidget toys, iPads, and every sensory toy you can imagine. And did I happen to mention I have a third child to keep happy during all of this too?

But despite the difficulties, I have a AA hockey player who is finally starting to socialize properly in middle school. And his younger brother is making it into puberty without much incident and is showing promise as an artist and a soccer goalie. They are happy, amazing kids who are in many ways like neurotypical  boys. They are not damaged. They are not lost. They are not broken. They are mine. And they are fully vaccinated.

So I would like to take a stand right now and demand that my children not be used as your reason not to vaccinate. Better yet, don’t use any autistic person as an excuse not to vaccinate. Sadly, there are those who do believe the anti-vaccine hype, so that means it is the responsibility of the rest of us to speak up.

Please sign this petition saying you will not use autistic people as an excuse not to vaccinate. Spread the word and share. The more voices that cry out, the sooner the stigma stops. I thank you, and my children thank you as well.

Jen Forsyth is a mom of three children, two of whom are on the autism spectrum. She is also a community advocate and works with several nonprofits in the Pittsburgh, PA area.

If you enjoyed this post, become a Voices for Vaccines member today.