In recognition of National Influenza Vaccination Week (NIVW) Voices for Vaccines is participating in a blog relay as part of a countdown to the first day of NIVW. Each day, a different Flu Vaccination Digital Ambassador will post about the importance of flu vaccination as it relates to their readers. You can follow the NIVW conversation on Twitter using hashtag #NIVW2014 and stay tuned as each Digital Ambassador shares who will be posting next.

What We Didn’t Miss

Last season, influenza took the lives of 109 children. And 90% of those children had not received their flu vaccine.

Despite these statistics, many parents will not get their children vaccinated against the flu. In 2013-2014, less than 60% of children received their flu vaccines, an uptake rate only marginally better than the 42% of adults getting their vaccines.

I get it. Finding a flu vaccine can be a hassle, and if you have kids of different ages, you might have to schlep different kids to different places for different flu vaccines. And you have to go back every year to get them at a time of year when the school year is beginning and soccer practices, lawn work, and after school activities are all competing for your time and attention.

But I also get how terrible the flu is. It’s not just about the deaths. Influenza results in up to 200,000 people being hospitalized and can cost the US economy $87 billion each year. Even if your child is healthy and emerges at the other end of influenza infection unscathed, the flu is an awful illness.

Many people excuse themselves from their flu vaccines, claiming that they make them sick or that they don’t work. Of course, most people know that the mild malaise caused by a vaccine is nothing compared to full-blown illness and that the vaccines affords a 60% effectiveness against preventing influenza. When the vaccine does not prevent influenza, it helps reduce its severity. 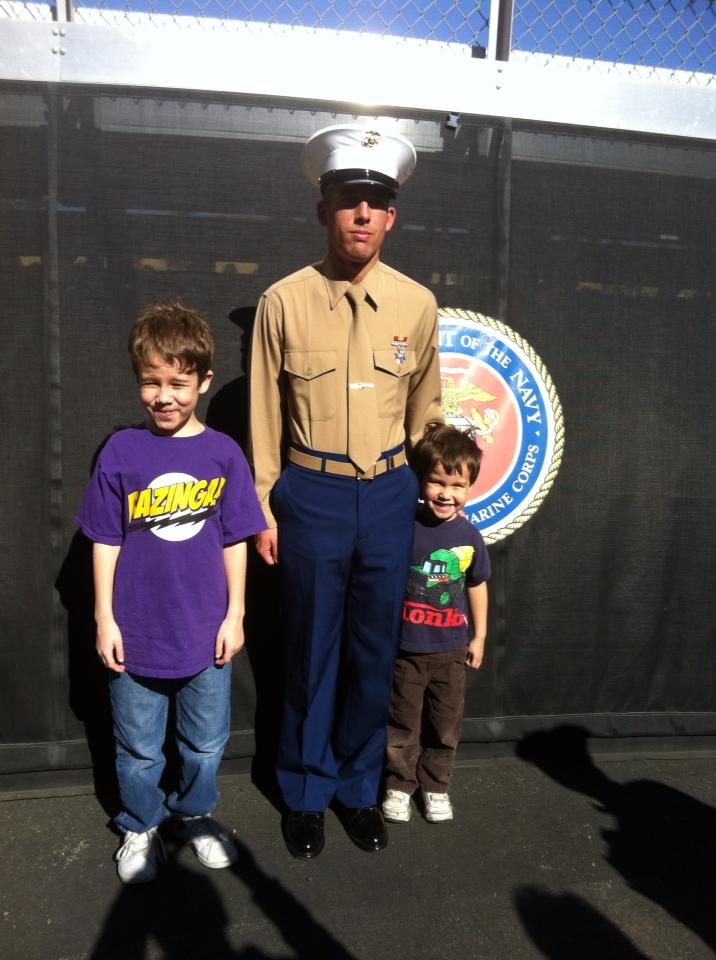 My family’s experience with influenza in 2013 serves as a perfect object lesson for the importance of getting a flu vaccine. We are so grateful we all got our flu vaccines that year.

In January 2013, my husband, my 9 year old, my 4 year old, and I traveled to San Diego to attend a graduation ceremony for my stepson. The day after we arrived, we went to SeaWorld only to have our visit cut short when my 4 year old became warm and too tired to walk and announced that it hurt to breathe.

We rushed to urgent care, and my pre-schooler’s temperature continued to rise. He fell asleep in the waiting room and was coughing intermittently. He must have been achey and uncomfortable because he was moaning and restless. The urgent care doctor was alarmed when he saw him, and I guessed it was the flu because so many of his classmates had caught it in the weeks before we left for California. A lab test confirmed my hunch, and I felt grateful that SeaWorld had been almost empty and hoped that we hadn’t exposed anyone there.

We holed up in our hotel room, and by the next morning my husband had fallen ill as well. Every time my youngest child crawled into my arms only to sneeze on my face, I felt doomed. I figured it was only a matter of time before we were all sick, stuck in the hotel room, and unable to function.

But that never happened. My older child and I never got sick, and the illness was short-lived for both my husband and my pre-schooler. For half of us, the vaccine completely prevented influenza–even though we had very close, prolonged contact with the virus. For the other half of us, the vaccine seemed to mitigate the severity of the illness during a year when influenza seemed particularly virulent and claimed the lives of 171 children. By the time the graduation ceremony took place at the end of the week, we were all fever-free and well enough to attend.

Some would point to our story as a failure–we got our vaccines, and some of us still got sick! I think this interpretation is cynical. We gained so much by being vaccinated. We were spared the worst of what can be an intensely severe disease, we recovered quickly, and we were able to celebrate my stepson’s wonderful accomplishment with him.

So each year, we get our flu vaccines. We get them because influenza is a terrible illness, and any way of preventing it completely or making it less severe is worth the moment of pain (or unhappiness of sniffing) that we have to endure.

I’m writing today because I don’t want your child to be a statistic or a story. I know you are busy and overwhelmed by parenting and pulled in a million different directions, but it is worth your time and energy to vaccinate your whole family against the flu.

Remember: CDC says an annual flu vaccination is the best protection against flu. Get your flu vaccine and encourage others to do the same by sharing your flu vaccine selfies on social media using the #VaxWithMe tag! Be sure to stop by the other NIVW relay participants’ blogs to learn about flu vaccination for everyone – tomorrow’s post will be hosted by Shot of Prevention.

Karen Ernst is the Parent-Leader of Voices for Vaccines. Neither she nor Voices for Vaccines received any compensation from any governmental agency for publishing this blog post or for participating in the Digital Ambassador program.