Almost seven years ago my journey in motherhood began. My son was born into this world in our bedroom, though it left him scarred (a severe obstetric brachial plexus injury). And while he should have been whisked away to a hospital and promptly given a Vitamin K shot (he was a severe shoulder dystocia with major hematoma on his head), my midwife encouraged us to call off the ambulance and just stay home. We followed instructions and to this day, I feel guilty about “what could have been,” especially after learning of the devastating effects a lack of Vitamin K can bring.

He stabilized, but the next week we entered the world of medicine after living in the natural childbirth/parenting world. A world of difference. Though it was a scary time for us, the children’s hospitals we became a part of and accustomed to weren’t as terrible and misinformed as I had long been led to believe. In fact, I found great peace in their care of my son there. He started receiving therapies, seeing specialist teams, and began the process of having surgeries to help his birth injury.

As hard as it may be to believe, although I was so thankful for the care the doctors and nurses had given my son and respectful of the knowledge they had, I still was staunchly anti-vaccine. After years of reading biased information against vaccines, the “dangers and risks” had infiltrated my brain! I couldn’t shake that off. So my son, and then my second son, received no vaccinations—and I was proud of this decision.

Fast forward one year later to the birth of my third son (yes, I had three babies in two-and-a-half years!). What a cute, fat newborn he was! Again, he received no Vitamin K and no vaccines. When he turned two months old, though, whooping cough (pertussis) started going around my area. At least one young infant death was reported on the news. At this point, we were traveling to our children’s hospital every week for my oldest son’s therapy, as well as traveling to some off-site locations for other therapies. A light bulb went off in my head: “Where do kids go when they are really sick? To our children’s hospital, of course!” I figured my baby had a high chance of catching whooping cough there.

I bought a book called The Vaccine Book and, though I later learned it has misinformation in it, it did change my mind about DTaP. My third son started receiving the DTaP vaccine on schedule. Once I talked with the pediatrician about that and had consented to the DTaP vaccine, she changed my mind about Hib. We live around a lot of Amish communities, and she informed me that sometimes those communities have a high rate of vaccine preventable disease such as Hib and that it was smart to let my baby have that vaccine too. I consented.

I did not, however, begin vaccinating my other children. But that summer my second son fell on a sharp rusted piece of metal on our farm, which cut his knee. Because we live on a farm and pasture our livestock, I was afraid that his injury could result in tetanus*. So I took him in and started him on DTaP shots, because I knew tetanus is not something to mess around with.

Soon I had my fourth baby. After reading about the risks of forgoing the Vitamin K birth dose—newborns are born deficient in Vitamin K and are at risk for vitamin K-deficient bleeding, or hemorrhagic disease of the newborn—I consented to her getting the shot at birth. Such peace I felt about it!

A year later, I began to read more and more about the scientific evidence of the benefits of vaccines. Because I was so quick to get certain shots when I felt my kids needed them, what other shots could I be wrong about? I was annoyed. The science challenged my notions! I was mad, too. “Could all this really be true and could I be wrong?” I was humbled by so many things in motherhood. Was this yet another humbling experience? Yes, it was. 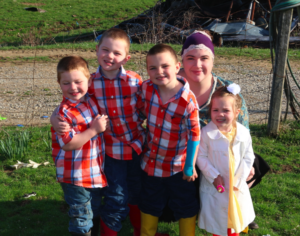 A couple months ago, I made an appointment with our local health department for vaccines for my four children. I went in hoping they wouldn’t be too harsh on me for refusing the vaccines not so long ago. I went to them, humbly asking for help, and they were so helpful with sorting out what shots we should give them first. The mumps are going around our area now, so we decided to include MMR that day. Was I nervous? Yes. Even though I know there is absolutely no link between vaccines and autism, lies and misinformation can hang out in your brain. You just have to remember that science is on your side and go with that over the feelings of worry. (Everything was fine and my four kids took the shots well… not even a fever).

So we are on the road of catching our children up. And I am so thankful! Thankful they haven’t already got a preventable disease that could affect them for the rest of their lives, and thankful they are going to be protected as they enter their school-age years.

My dad had polio as a child and it paralyzed him for weeks. He made a miraculous recovery and was able to walk again. Looking back on it now, I can’t believe that even with his story I had refused the polio vaccine for my children, opening them up to a similar fate.

These lies going around and the misinformation seemingly everywhere can seem so convincing to a worried parent. Most of my friends believe it, and their children remain unvaccinated. Even watching my change of mind hasn’t persuaded them to start vaccinating, but my hope is that maybe there is someone out there who can relate to my story. Maybe you’re feeling iffy and nervous about starting to vaccinate. Maybe my story can give you a boost of courage! A previous parent sharing her vaccine story on this website said that she felt the anti-vax movement is almost like a cult and so courage is required to break away from it. I agree with her.

Even though I cloth-diaper my babies, gather our own eggs, raise our own meat, grind our own wheat, hang our sheets on a clothesline some parents who choose not to vaccinate their kids may not consider me a “natural parent” anymore, simply because I vaccinate my children. But I can look at my precious children and know they are protected from polio, from tetanus, from pertussis, and so on, and I know that nothing is more natural than a parent protecting her children.

Betsy is a farm wife and stay at home mother of 4. Her daily dose of encouragement is Isaiah 40:11. When she is not feeding cattle and sheep, baking bread, or “saving lives daily” (aka: her own mother’s definition of motherhood), she is at her sewing machine.

*Editor’s note: Tetanus can follow any penetrating injury in a susceptible person.