I like midwives, extended breastfeeding, alternative schooling, wholesome foods, homemade cloth diapers, cleaning with baking soda & vinegar, cooperative living, home remedies, not trusting the government, reusing secondhand things, do-it-yourself-ing…and vaccinating. One of these things is not like the other. 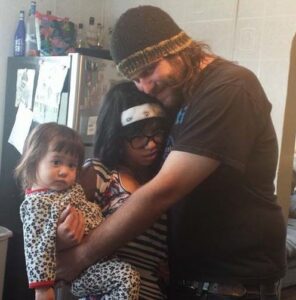 When I first found out I was pregnant, I was wary of the vaccine schedule. After all, as the anti-vaccine rhetoric frequently reminds us, chronic and autoimmune illnesses are on the rise, autism and other cognitive/developmental conditions are on the rise—where might they be coming from? A natural distrust of corporate greed, mixed with little biological know-how, made me a brow-raising skeptic. What if the vaccines turn her into a passive, high-fructose corn syrup-eating Good Little American?!

Ultimately, I chose to vaccinate. My mother is from the Philippines, where infectious diseases still pose a greater problem than in the United States. It would’ve been selfish of me to deprive my daughter the opportunity to explore her international heritage—VAERS, alleged side-effects, skepticism or not. Of course, this meant that we would have to do our research, and the research was on our side.

I began by watching a great documentary: PBS Frontline’s The Vaccine War. Although some criticized it for being “one-sided” in its arguments and presentation, The Vaccine War looks into the rise of preventable infectious disease in anti-vaccine communities. Immediately what came to mind was my hometown: Madison, Wisconsin.  Madison has experienced outbreaks of vaccine-preventable diseases, due in part to a progressive culture lax on vaccination.   Preventing pertussis requires 93-95% of the population be vaccinated and only 70% in Wisconsin were.

Shortly after having my daughter, I enrolled in prerequisite classes for our local college’s nursing program (I have since changed majors). Having a greater understanding of chemistry, healthcare, and anatomy made doing research into our own health decisions—including vaccination—much easier. I began to look at the issue from all sides: that vaccination is, despite my perhaps libertarian tendencies, not a matter of personal freedom but rather an issue of public health. Whereas it really doesn’t affect other individuals whether or not I let my daughter have high fructose corn syrup, it does affect others  whether or not I vaccinate, and it infringes upon all of our rights to have healthy children.

Consider all of the people who might share a clinic or hospital waiting room with a child suffering from a preventable illness. One might be an elderly patient who never contracted the illness or whose immunity from a vaccine had waned. Another might be a child who could not, for medical reasons (such as a compromised immune system), be vaccinated. There might be a newborn infant in there, too young to have received her vaccines.

You ask, “How does my unvaccinated child hurt your vaccinated child?” I respond, “Not as badly as they’d hurt another unvaccinated child.” Vaccine skeptics have told me that if these are the only two options, they would rather harm others through not vaccinating than harm their own children by vaccinating. However, this is a  false belief–believing that you are choosing between harming your children or harming other children. In fact, the choice is between putting everyone at risk of disease or preventing disease.

I choose to prevent. I’m here to let you know that it’s okay to vaccinate. It doesn’t revoke your Crunchy Club card. It doesn’t make you a bad parent. In fact, it makes you a good parent, one who cares not only about her child’s health but also the health of other children. That’s the kind of parent we need in our globalized world! Together, let’s put the naturalistic fallacy to a rest and be the best parents we can be.

Helen Scottsburg* is a mom, student, and artist living in Muncie, Indiana. She is currently studying social work at Ball State University. When she is not studying, doing all the dishes, or turning her compost pile, she is on the road with her band Apathy Wizards making people dance. Her blog can be found at http://punkmum.wordpress.com.