Of all the criticisms lobbed at me after I “came out” as pro-vaccine, by far my favorite is that I’m in the pocket of Big Pharma.

If only! I don’t exactly know what happens to one who is in the pocket of Big Pharma, but I hope it involves a lot of gold chains with diamond-studded “Lipitor” pendants and Jet Skis donning the NuvaRing logo with teeny tiny fine print etched around the handlebars. I’d at least like a Viagra mug or something.

Alas, I am so not in the pocket of Big Pharma that I didn’t make a single penny from what I wrote because The Huffington Post is a non-paying outlet and I’m, regrettably, not on Merck’s dole. Please look forward to my upcoming e-book, How to Get Your Writing Read By Millions of People and Not Make a Single Penny Doing It. Don’t worry: the e-book will be free. 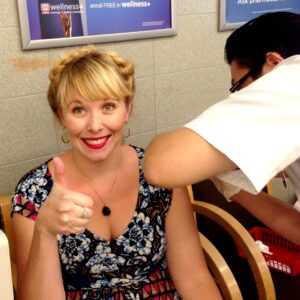 I’m ashamed to admit that I did not want to “come out,” that I had to be slowly cajoled into admitting how frustrated I’d become by the superabundance of anti-vaccine nonsense being spewed into every cranny of the interwebs. I’d long admired my Facebook pal, Sundari Elizabeth Kraft, for her ability to go into ultra-crunchy mom groups and positively and supportively urge for vaccinations. I thought I couldn’t do that. Moreover, I thought it was pointless.

Sundari, being lovely and kind, didn’t call me out on being a coward, but she did send me a link to a Voices for Vaccines conference call that quite adroitly made the point that we MUST argue with anti-vaxers, not necessarily to change their minds, but to change the minds of other people who might be reading. Totally convinced, I took to the best platform I had at my disposal, The Huffington Post, and wrote something up.

I expected it to maybe get 1,000 likes. That would be about normal performance for my writing there. Imagine my surprise when it got over 400,000 – far, far, far more than anything else I have ever written anywhere.

As happy as I am to have spread the word about vaccines, it has come with a fair amount of strife, the least of which is the assumption that I’m currently vacationing in the Celebrex Beach House. Twice during the last week, I have fled my house and its WiFi to go to science museums so that I could just sit amongst evidence of intelligent inquiry and remember that, as the They Might Be Giants song goes, science is real. I am a “fan” of science. Remind me to tell you sometime about the atom tattooed on my back…

Because of scientific inquiry, we do not need to rely solely on the testimony of people who claim their children were harmed by vaccines. We can go to the data and see how truly rare those reactions are, how difficult they are to correlate with vaccines and how much less likely it is that a child will be damaged by a vaccine than affected by a vaccine-preventable illness, especially if the current trend against vaccines continues. Science is the antidote to anecdotes.

I have a middling background in science, including an undergraduate degree in biological anthropology that has few uses other than arguing with creationists and ensuring that my children understand the difference between monkeys and apes. I am not a scientist, nor a medical professional, and if you quizzed me right now on what the spleen is for, I’d have to go to Wikipedia before I answered.

I understand that the history of medicine is littered with grievous mistakes and that, ultimately, I’m responsible for my children and myself. However, as noted, I don’t even know what a spleen does, so my best practice is to rely on experts. That requires trust – trust in doctors, trust in hospitals, trust in the CDC and the NIH, trust in professions and institutions that have violated the public’s trust before. In doing so, I’m not failing at being a skeptic. I’m succeeding in trusting my own ability to spot red flags, seek second opinions, and ask good questions.

I somewhat understand the allure of the anti-vax narrative. It is a view that jumbles people’s sense of what is real and then guides them towards the “truth.” The movement pats its followers on the back for distrusting the mainstream. It is similar to some religious groups in that part of its appeal is an opportunity to join a club that will spend a great deal of time congratulating one another for joining and being among the special few to see this previously-hidden truth.

But the comparison to religion is unfair. I have many close friends who are very religious and I see how they engage with their faith by questioning, re-evaluating and evolving. That is not what happens in these anti-vax communities. They are less lusting after knowledge than they’re engaging in a feedback loop where they’re all just so pleased with themselves for disagreeing with us sheep who “blindly” read studies, evaluate relative risks and consult with medical professionals. They constantly consume a narrative of specialness, and that’s what allows them to remain confident in the face of overwhelming evidence of their wrongness. Also, it’s what makes arguing with them so tedious. 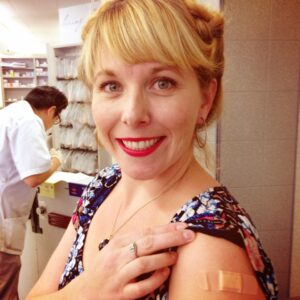 There were a few moments in the last few weeks when I regretted so specifically asking people to engage with anti-vaxers, largely because it meant that I had to share in that frustrating job. I am looking forward to the day in the future – maybe five years from now, maybe ten, jeepers, maybe twenty – when the fad of vaccine refusal is but a distant memory that we can all laugh about. Until then, I have a new appreciation for the pro-vaccine movement and how flush its ranks are with people who are not merely “fans” of science, but real scientists and health care professionals, people who actually know what spleens are for.

JJ Keith’s work has appeared on the Huffington Post, Salon, Babble, theRumpus.net, xoJane, The Nervous Breakdown, the Sydney Morning Herald, iVillage Australia and more. She lives in Los Angeles with her husband and two kids and her first book will be out next fall from Skyhorse Publishing. Her website is at http://jjkeith.net.