When my son was 3 years old and my daughter 5 months, a woman emailed a local mothers’ listserv and revealed that her son had pertussis. He was unvaccinated.  The mother brought the child to a strip mall where many children who were too young to be fully vaccinated, including my daughter, were present and may have been exposed.  I was livid, and while not everyone who gets pertussis is unvaccinated, it’s been shown that unvaccinated children are at much higher risk of contracting and transmitting vaccine-preventable diseases.

Fast forward to three months: my then 8-month-old daughter was diagnosed with pediatric dilated cardiomyopathy (enlarged heart). PCM is sneaky and dangerous. Many children are only diagnosed post-mortem because their hearts 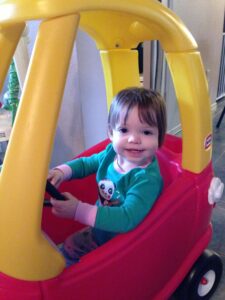 can be very sick before any symptoms show up. Lucy’s only outward symptom was fast breathing. My daughter most likely already suffered from it when the potential pertussis exposure occurred at 5 months. Pertussis could have killed a healthy, normal child at that age, let alone one with an undiagnosed heart condition.

Pediatric cardiomyopathy is incurable at this time. Medicines exist that help, but they often cannot stall or reverse the course of the disease. When the disease worsens to heart failure, a heart transplant is the only option. There has been no change in outcomes for children with this disease in 30 years.

I knew nothing of this disease before my daughter was diagnosed with it. We think her case was viral, possibly caused by the same strain of parvovirus that causes Fifth Disease. The virus infected Lucy’s heart instead of causing the harmless childhood disease most experience. The doctors originally said Lucy would be one of the ones to recover. They predicted she would be off meds in 6 months.

Instead, we buried her 6 months later. She died in her sleep on Mother’s Day 2013, one day after she turned 15-months old. I found her in her crib.

You may wonder what all of this has to do with vaccines. Many do not know (I certainly didn’t) that transplant candidates and recipients cannot receive live vaccines, such as MMR. When they  go into transplant surgery, the doctors completely suppress the immune system so their body will not reject the new organ. If they have recently had a live vaccine, the virus will overrun their body and cause the disease while their immune system is suppressed, instead of producing protective antibodies. Obviously, getting measles, mumps, rubella, or any vaccine-preventable disease when they have just undergone a transplant would be much more catastrophic.

After an organ transplant, recipients cannot receive live vaccines for the same reason. They remain on anti-rejection meds for the rest of their lives. The immune system has to remain at least somewhat suppressed for the body to continue to accept the organ. The risk of rejection never goes down after a transplant, no matter how long it has been.

As you can probably guess, the diseases prevented by vaccines pose an even greater risk to people already struggling with a serious illness, especially if they are also immune-compromised. Lucy’s heart condition meant that a simple cold could have been fatal for her. We spent the entire cold and flu season terrified of the flu and RSV. She received Synagis shots every month to help prevent RSV, the whole family received flu shots (she could have that one, thank goodness), and we placed canisters of hand sanitizer and wipes in our house and car and took them everywhere with us. I even pulled the kids out of music class because it was just too dangerous to take Lucy there in winter.

Lucy was listed at Status 2 for transplant when she was 13 months old. Luckily, she already had her 12-month shots, which meant she had received one MMR. But that still left her entirely too vulnerable. I worried so much for her and felt so angry at the parents contributing to the decline of herd immunity that should have protected her.

Several people I discussed this topic with had no idea what herd immunity was, even though they claimed to have spent “hundreds of hours” researching. To their credit, once they learned about Lucy’s situation and the role herd immunity plays in protecting children like her, they were very concerned and receptive. Some of my friends told me that Lucy’s story caused them to have a change of heart. They are better at making sure everyone in their family gets a flu shot now.

Most of you probably have no idea how grateful parents of seriously ill children are to those who vaccinate. When you already fight everyday to keep your child alive, worrying about parents who don’t vaccinate or delay vaccinating places another burden on your already over-burdened shoulders. After watching my child decline and die, I just can’t believe that other parents would risk going through serious illness when there are shots to prevent it. If there were a shot for cardiomyopathy, my two surviving children would be first in line.

When you are deciding about vaccines, you have got to be community-minded. You cannot think about your child only. How would you feel if your child was already struggling with dilated cardiomyopathy and someone gave them the measles? Or if they survived a heart transplant and received a second chance just to be killed by flu passed on by someone who thinks the shots don’t work? You have got to consider everyone else. When you choose not to vaccinate, you are potentially endangering children whose parents are already struggling to keep them alive. That’s the cold, honest truth.

Everyone asked how they could help while Lucy was alive and after she died. I always tell them that one of the best ways they can help is to keep themselves and their kids up-to-date on vaccines. Science shows that vaccines are safe and effective.  A decision to not vaccinate not only places your child at risk but can impact others who may not be able to protect themselves.

Sara Farmer is a stay-at-home mother who lives with her husband and her son in Texas. They are expecting another baby! You can read more about Lucy’s story on Sara’s blog.