I am a parent who did not vaccinate my children when they were young.  I delivered my four children at home.  I have the strongest, healthiest, most beautiful babies.  My third-born son, Jacob, was born smaller than the other three children. I did not think anything of it because I felt he would catch up.  I ate very healthy while I was pregnant with him, as I did with my other three.  There were no toxins or trauma that surrounded him the day he was born.  His birth was beautiful.  And I did everything right, as far as keeping him and my other children safe from everything that would cause autism—or what I thought would cause autism. 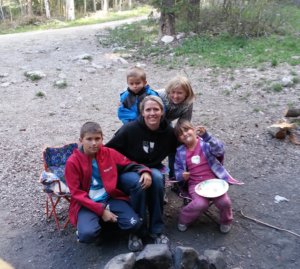 I noticed Jacob was behind in some of his milestones. Although he didn’t walk until eighteen months, he reached his cognitive milestones.  He was a very happy baby. I assumed he was a late walker because he was small, but I found myself regularly taking him to the doctor to find out if Jacob was okay; because he was hitting his other milestones, he was fine.  I did keep a diligent eye on him, however.

As the months went on, Jacob stopped hitting those cognitive milestones. Because we had recently moved, we saw a new doctor. This doctor, too, tried to tell me Jacob was just fine. After all, he was so cute and happy. However, I just knew something was not right. I took him to an eye doctor to get his eyes checked because he wasn’t getting his colors.  I had been reading to him and teaching him his colors, and he wasn’t getting it. I thought maybe he was colorblind.  His eyes checked out okay.  I went to get his hearing checked and his hearing was okay as well.

Finally, I took Jacob to get tested by the local school district, an early childhood screening.  After they tested him, they told me that he was “severely delayed” and had autistic tendencies. I am sure you can imagine my absolute shock and complete heartache. I could not blame vaccines, and I could not blame toxins. All I could do was move forward. The district recommended early interventions in preschool for Jacob.

I was upset about my son’s autism because I thought I did everything right. I am so healthy. My husband is healthy. My other children are healthy.  I had been told by several of my other son’s teachers that he is the smartest student they have ever taught. My daughter, without even trying, is a very talented swimmer.  I tell you this because I want you to know that I know there is nothing I did as a mother to “cause” my Jacob’s autism.  There is no pattern whatsoever in my children to indicate I did anything to cause this to happen to my Jacob.  There are voices out there that say toxins and vaccines cause autism.  I know that is not the case.

After I learned that Jacob had autism, I vaccinated him. However, because we were so behind in the schedule, I had to file an exemption before preschool just to give me time to catch him up. I also began to vaccinate my other children before they entered public school, but as with Jacob, we were so behind that we still had to file exemptions. None of my children had reactions after their vaccinations—my oldest son is still very smart, my daughter is still very talented, and my son Jacob is still very happy. As a side note, my youngest daughter had been fussy for many years in her early life. I found out later that she is allergic to wheat.  As soon as I took her off of wheat, she had improved with every aspect in her life, When she eats wheat, she feels and acts terrible.  She is very sensitive andnd she had no reaction whatsoever to the MMR vaccine or any other vaccine.

My son Jacob was born as God intended him to be born.  He was conceived and born in his own special and perfect package.  I thank God that my children are now safe from vaccine-preventable diseases.  I believe it was divine intervention that kept them safe until they were able to be vaccinated.  I know now that vaccines are safe for my family.

Ashley Phillips is a wife and mother of four children. She is a stay-at-home Mom who has a Bachelor of Science degree in Dental Hygiene.  She and her husband have been married 15 years.